IKARÓS based on the famous Greek Myth.

Icarus was the son of the master craftsman, Daedalus Labyrinth Crete, the creator of the Labyrinth. He and his father attempt to escape Crete using wings that his father constructed from feathers and wax. Icarus’ father warns him first of complacency and then of hubris, asking that he fly neither too low nor too high, so the sea’s dampness would not clog his wings nor the sun’s heat melt them. Icarus ignored his father’s instructions not to fly too close to the sun; when the wax in his wings melted he tumbled out of the sky and fell into the sea where he drowned, sparking the idiom “don’t fly too close to the sun”.

The production shines a spotlight on society, and politicians’ greed. This desire for more is explored by looking at previous generations and their way of thinking. Parallels are drawn between this and Daedalus, and how they create the “labyrinth” for future generations. Perhaps this is why history repeats itself? 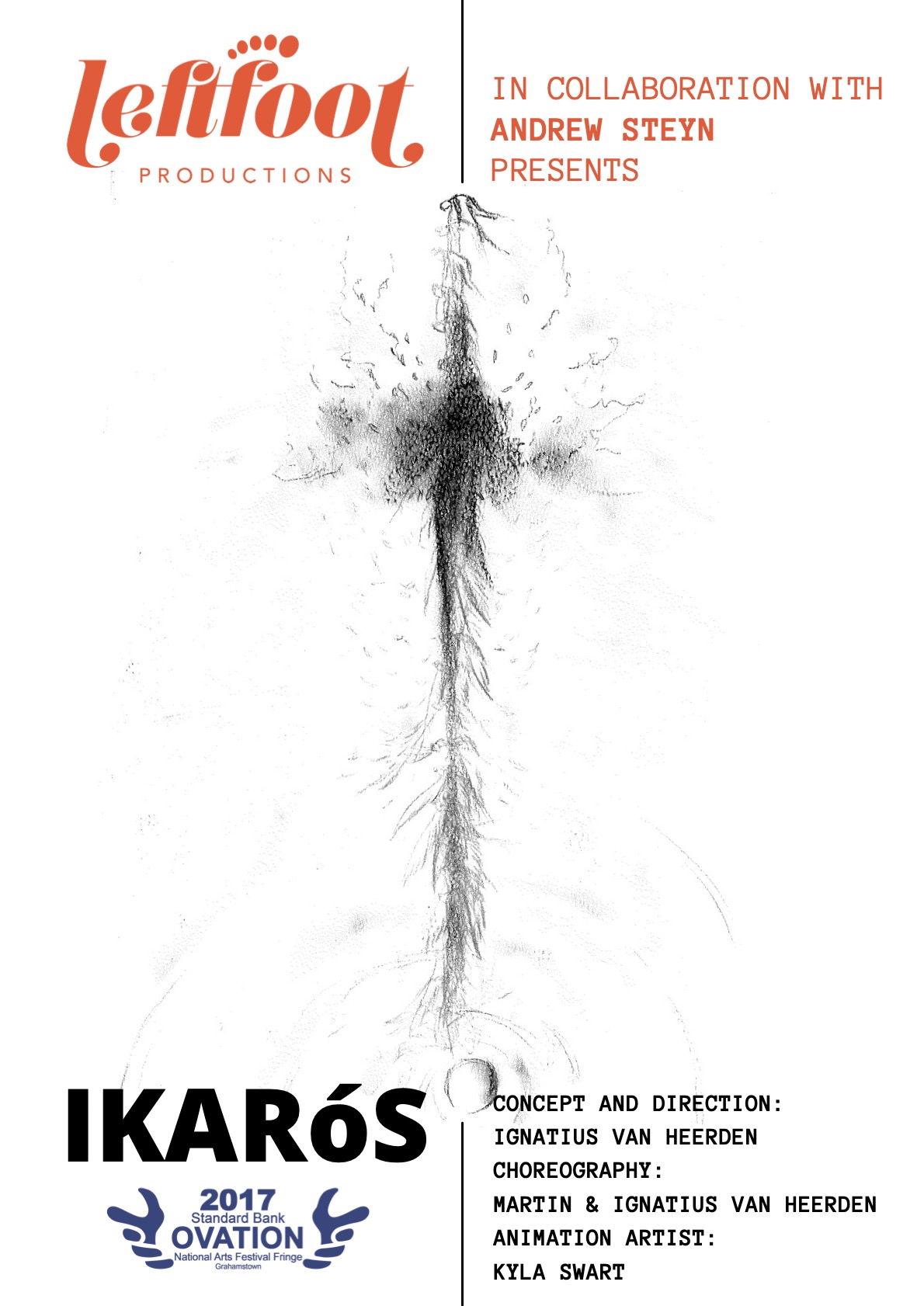 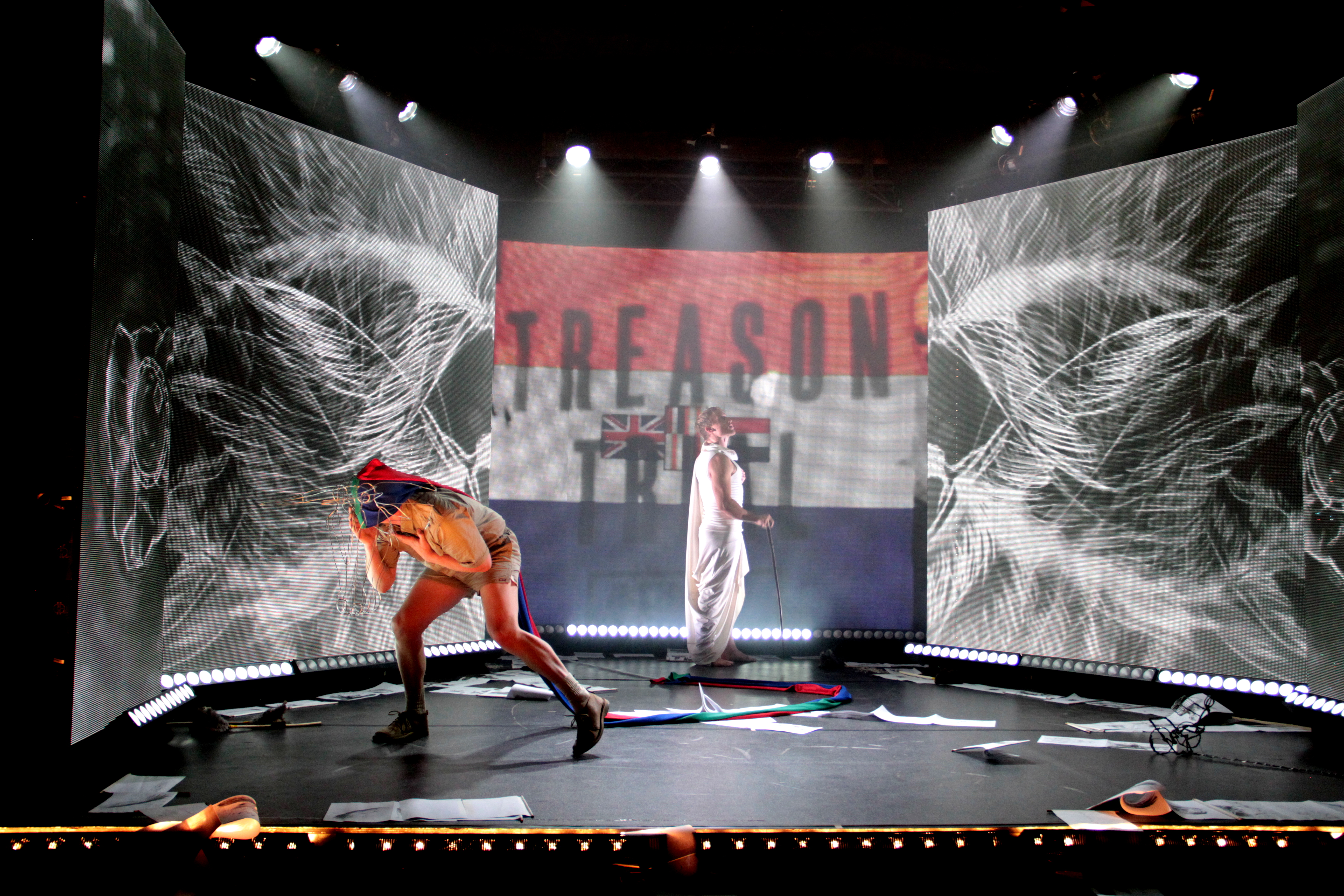 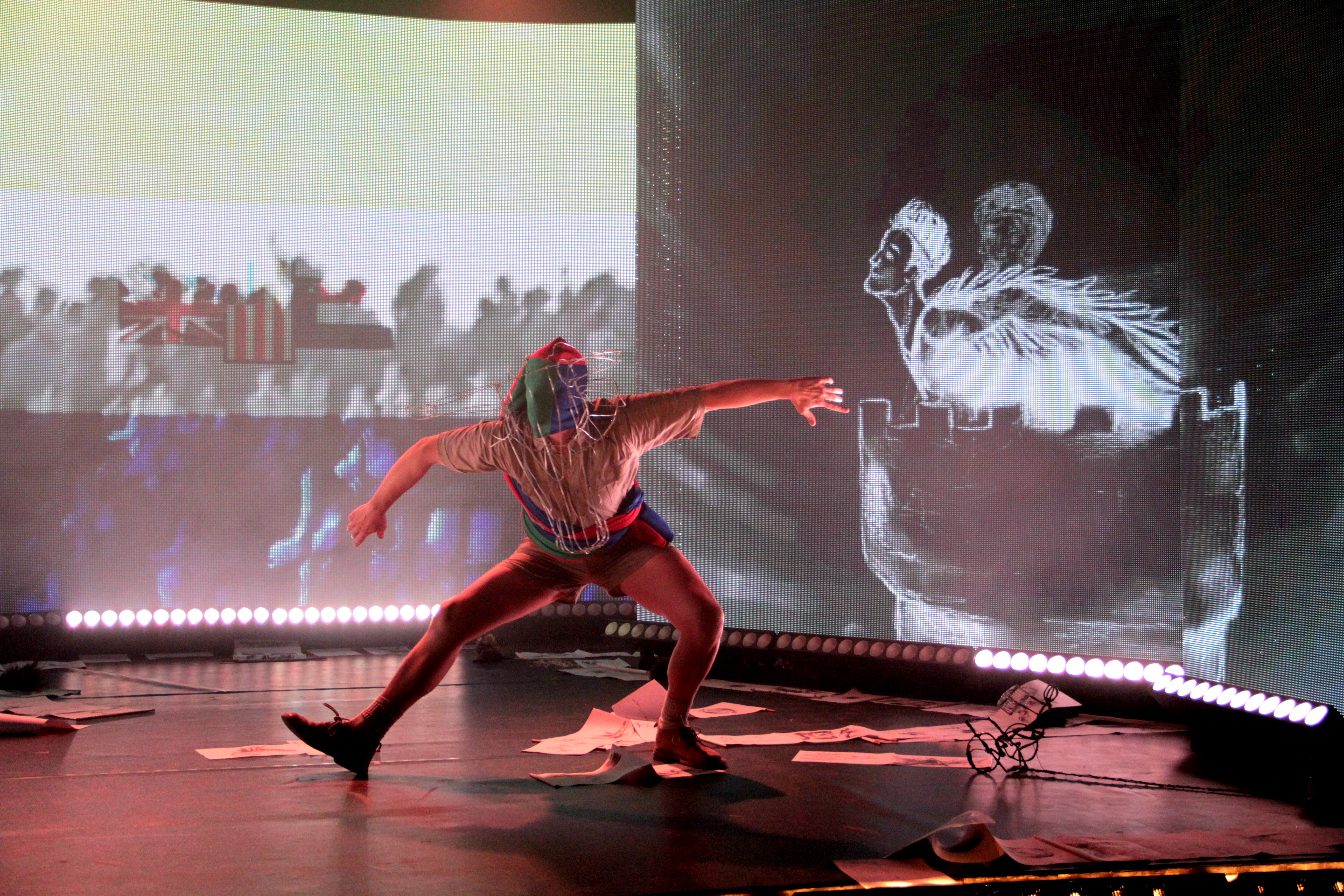 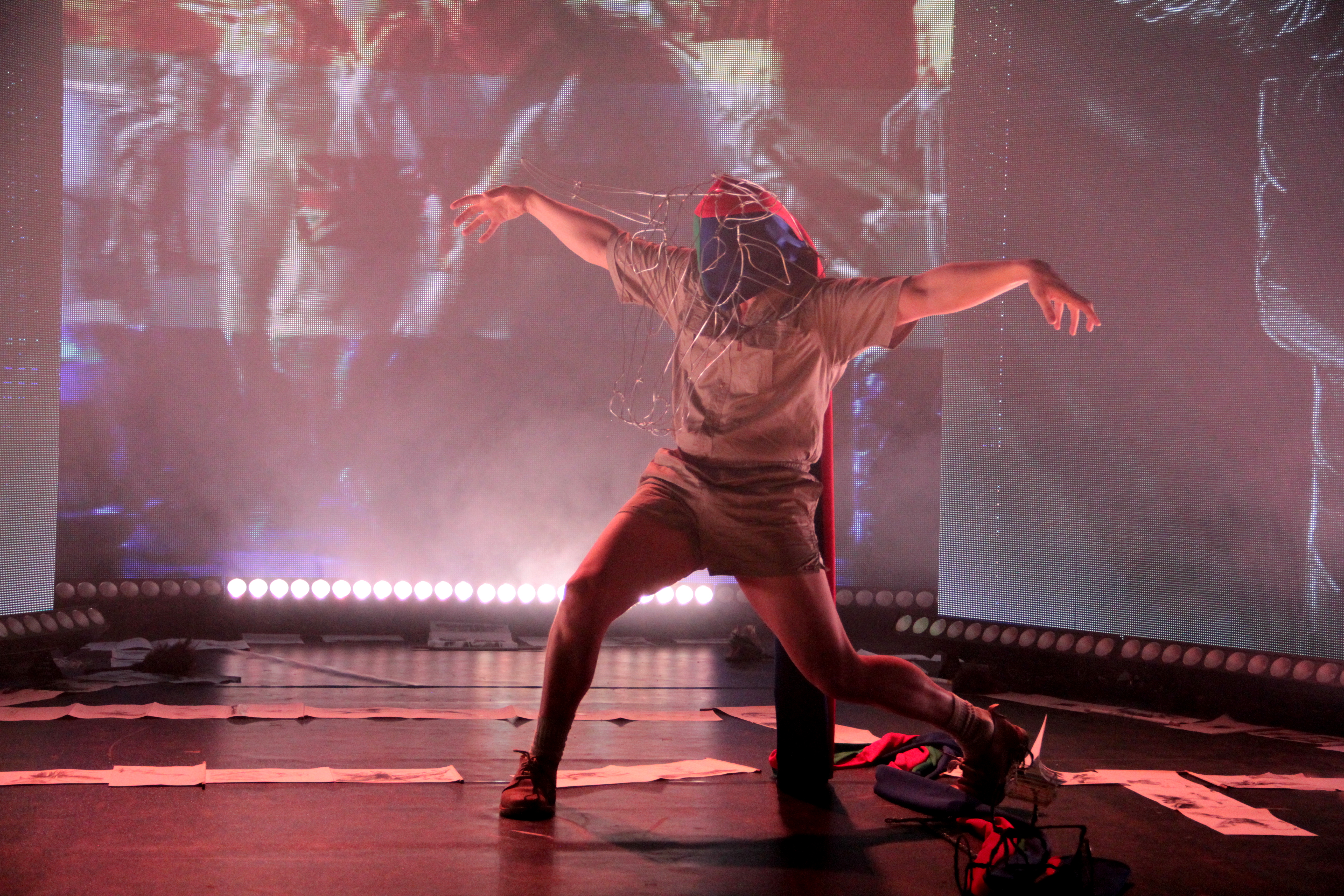 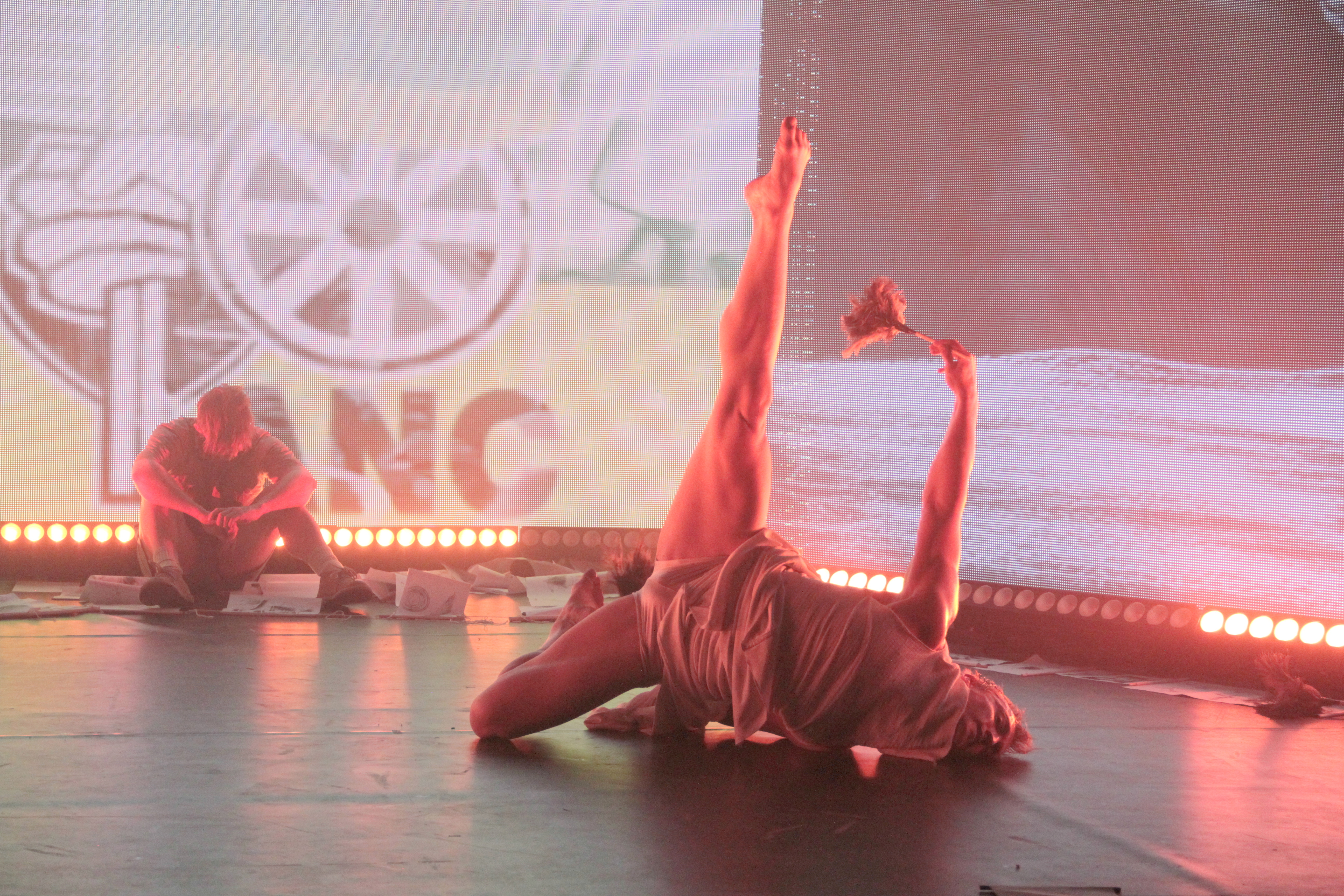 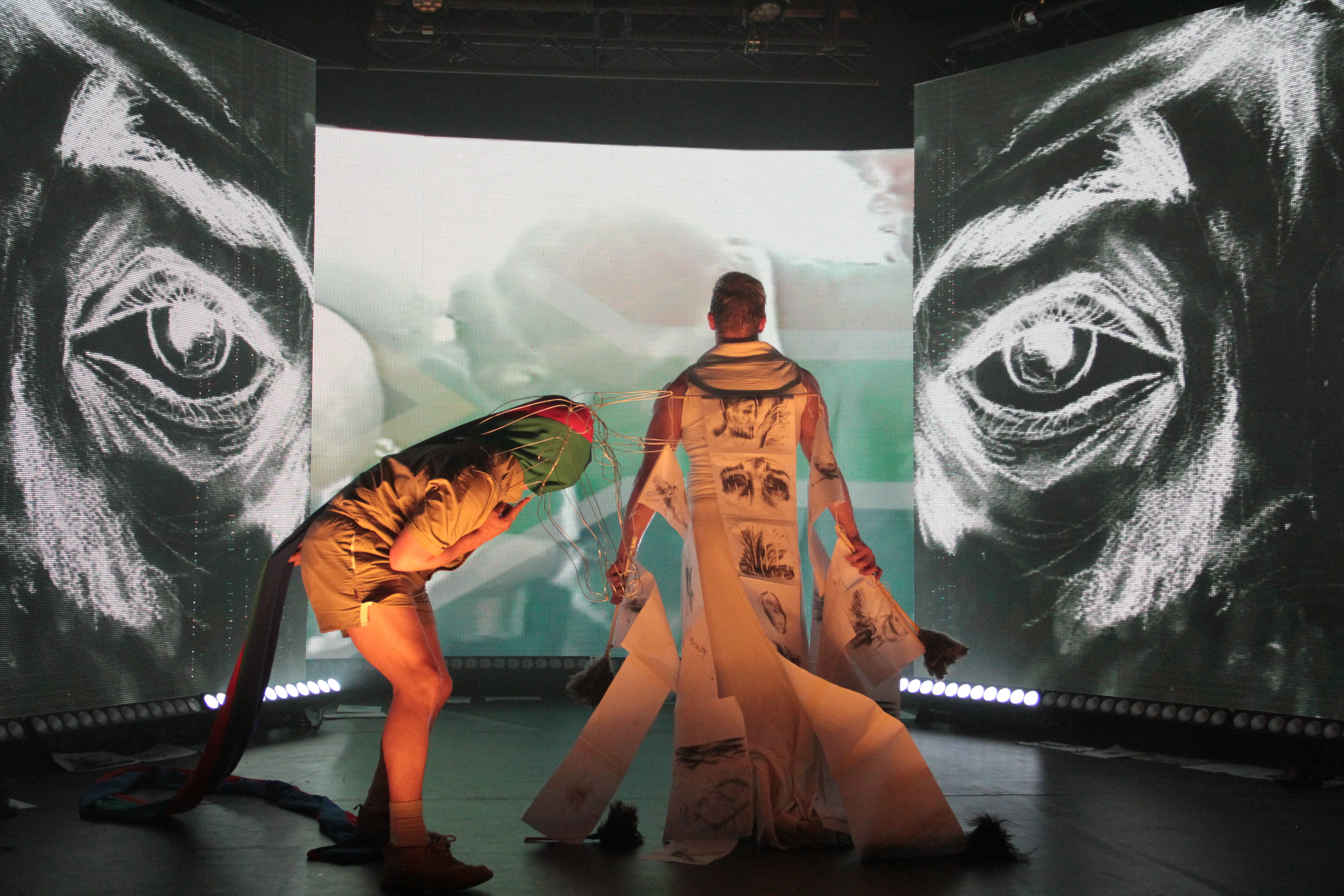 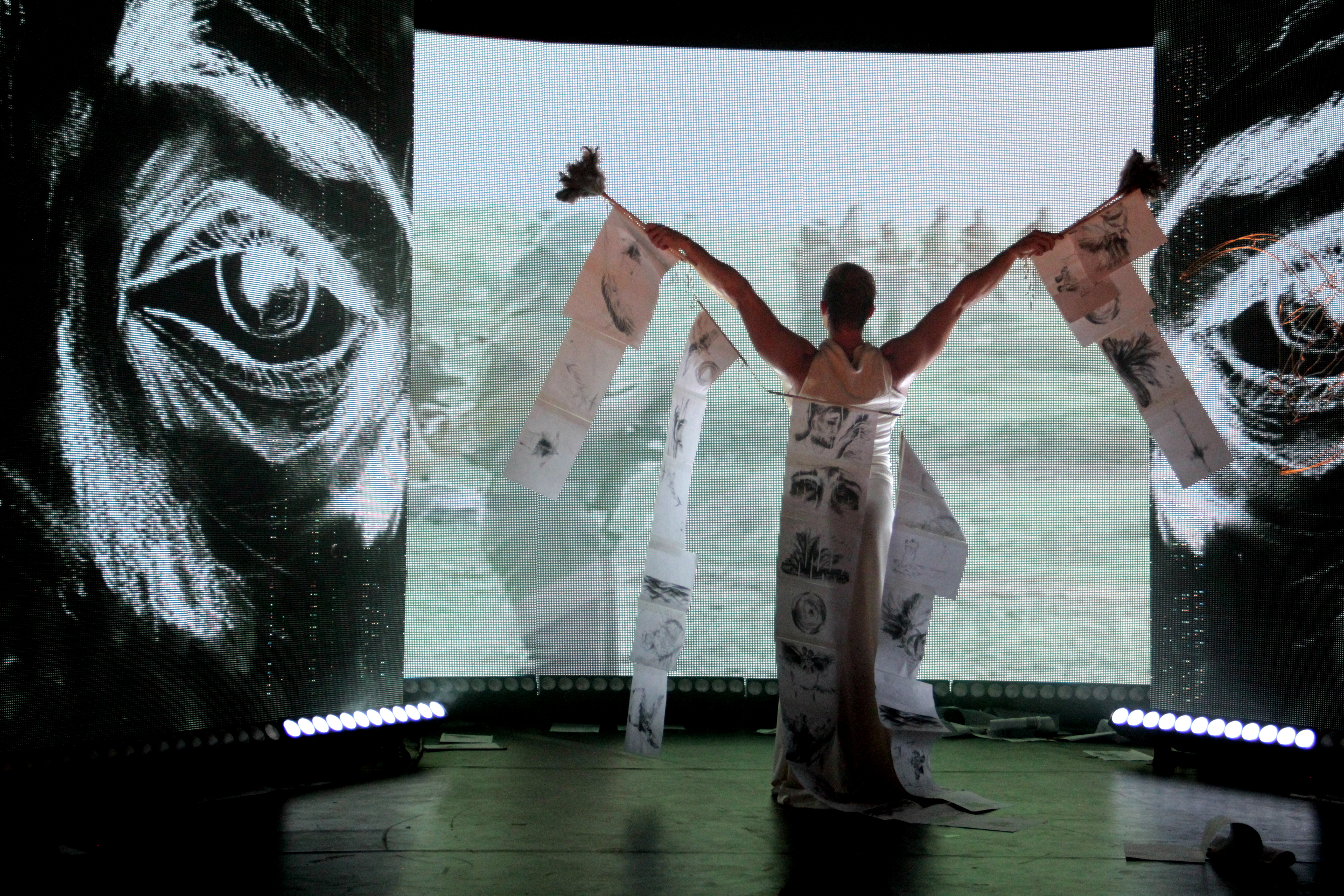 Choreographer/ Performer/ Director – Ignatius van Heerden
Ignatius van Heerden displays his extensive dance training skills in the styles of Jazz, Ballet, and Contemporary Dance. Successfully obtaining a number of awards over the last decade, of which some include The FNB Vita Award for the Most Promising Male Dancer, a Naledi Award for the Best Ensemble Performance in a musical, and A Merit Award at the National Arts Festival for excellence in creativity and innovation in his work 6 impossible things, for Oakfields College Faculty of Dance and Musical Theatre. Most recent works include Birthing Nureyev, Droom, and the highly acclaimed Nijinsky’s War which received a prestigious Standard Bank Ovation Award for artistic excellence along with six BroadwayWorld.com, and four SA Theatre Magazine nominations. Ignatius has worked with some of South Africa’s most prominent dance companies and choreographers which include Robin Orlin, David Goldie, Chris Kindo, Bailey Syman and Kelsey Middleton, amongst others. Opening his talents to the field of Musical Theatre he performed in Odessy, Joseph, Jesus Christ Superstar and Peter Pan. Other productions include Disney’s Beauty and The Beast, Disney’s High School Musical, Fred Abrahams’ Jungle Book, Madame Zingara’s, Romeo’s Kiss, Tango Nights, SwingTime at the ballet, Moffie and Nataniel’s Combat.

Aside from performing, Ignatius has choreographed numerous commissioned works, and was chosen to partake in the FNB Dance Umbrella Choreographic residency. He has created works for the Youth Dance Company of Tshwane, FNB Dance Umbrella, KKNK National Art Festival, Kmad.com and Fantastic Flying Fish Dance Co. Ignatius was one of the founding members of move1524 and acted as the artistic director and choreographer. Performances for the company took him to Greece, Athens and this led to a position in the International Dance Council (CID – UNESCO). He was commissioned to choreograph a new work for FNB Dance Umbrella’s 20th anniversary year, and worked under acclaimed Robin Orlin in Dressed to Kill, Killed to Dress, a European Tour. He choreographed In Exile under move1524 as well as My breath carries me over. Other works include FLESH and J’Zel, both premiered at the NAF in Makhanda and were received well critically.

With much enthusiasm and incredible passion, Ignatius founded his own dance studio: Iggy’s Dance Academy and has also spent the past few years training, developing and lecturing the Dance and Musical Theatre students of Oakfields College. In the year 2016 he produced as well as performed in the premier of the play (The) Last Supper for which he was nominated in the Best Actor in a Play, as well as Best New Choreography and four other BroadwayWorld.com Theatre Awards. His 2016 involvements included directing Martin van Heerden’s Woestynland for Woordfees, Choreographing Fragments for Pro-Arte Alphen Park and nefelibata on Oakfields College Faculty Dance and Musical Theatre, for the National Arts Festival.

Dancer – Martin van Heerden
Martin studied dance at TOM School of the Arts, under the leadership of Pinto Ferreira. He has been a professional dancer since 2004 and intensively worked with Kelsey Middleton’s’ Kmad.com contemporary dance company throughout his career. He has also done seasons with SABT, and has worked with choreographers like Christopher Kindo, Ignatius van Heerden, David Matamela, David Gouldie, David April, Debbie Rakousin, Willie Venter and Kelsey Middleton, to mention a few.

Martin has tried to balance a career in most styles of dance, doing theatre shows as well as corporate and musicals. Musicals include African Footprint, Jesus Christ Super Star, Chess, High School Musical, and Starlight Express. Highlights of his career include being invited to perform the lead role in Christopher Kindos’ me and you at the FNB Dance Umbrella Gala Evening, performing in Nataniel’s men who fly, Combat and After Animals, for which he has also been nominated for a Naledi for best choreography in a musical, and writing and performing in his one-man show Woestynland. Martin has also been in numerous Skouspel and Afrikaans is Groot productions. He also performed a Strength and Balancing act in the famous Madame Zingara’s and is currently expanding his artistry into Aerial Arts.

For the past 5 years, Martin has been passionately involved in the development for Artistic Roller Skating in South Africa and in 2014 choreographed and participated in the World Artistic Roller-Skating Championship in Spain, as the first African show team in history. Since then, Martin has become the resident Choreographer and Assistant coach for Team South Africa, working with kids in rural areas all over the country. He recently returned from the World Roller Games in Barcelona, Spain, where two of his skaters were the first African skaters to participate in the division Solo Dance, making history once again.

Martin also taught at numerous tertiary dance and musical theatre institutions like Stage Door and Oakfield College in the styles of ballet, contemporary and jazz, and is currently a private dance coach, conditioning and strengthening young dancers for the competition world. Martin is a certified Ballet Teacher with the Dance Academy of South Africa.
Award nominations include:
FNB Vita Award for best male newcomer in contemporary
Kanna Award for best male dancer
Naledi Award for best choreography in a musical
Naledi Awards for best choreography in a musical

AV Design and Artist – Kyla Swart
Kyla Swart is a 20-year-old artist residing in Johannesburg, South Africa. She specialises in various art mediums; including watercolour, pen, charcoal, pencil and Copic markers. She is currently studying a BA in Motion Picture Medium and is in her second year at AFDA. Her primary focus in all of her work is to capture movement and emotion. She has started a small business selling art commissions and is dabbling in videography and photography. Her goal is to further capitalise on her diverse artistic capabilities and enter the industry with her passionate understanding of how art can tell stories.