The play revolves around Johnnie Motsamai, “the celebrity” who falls in love with Maria, “a wannabe”. He shows her the lifestyle led by celebrities where everything looks glamorous. Maria has a friend by the name of Soul. He is “a self-proclaimed playwright” and it is his work that Maria steals.

Johnnie Motsamai is a tale of forgiveness, missteps, challenges to artists’ endeavours, and genius. It’s a celebration of Bra Sol Rachilo while he is still alive. 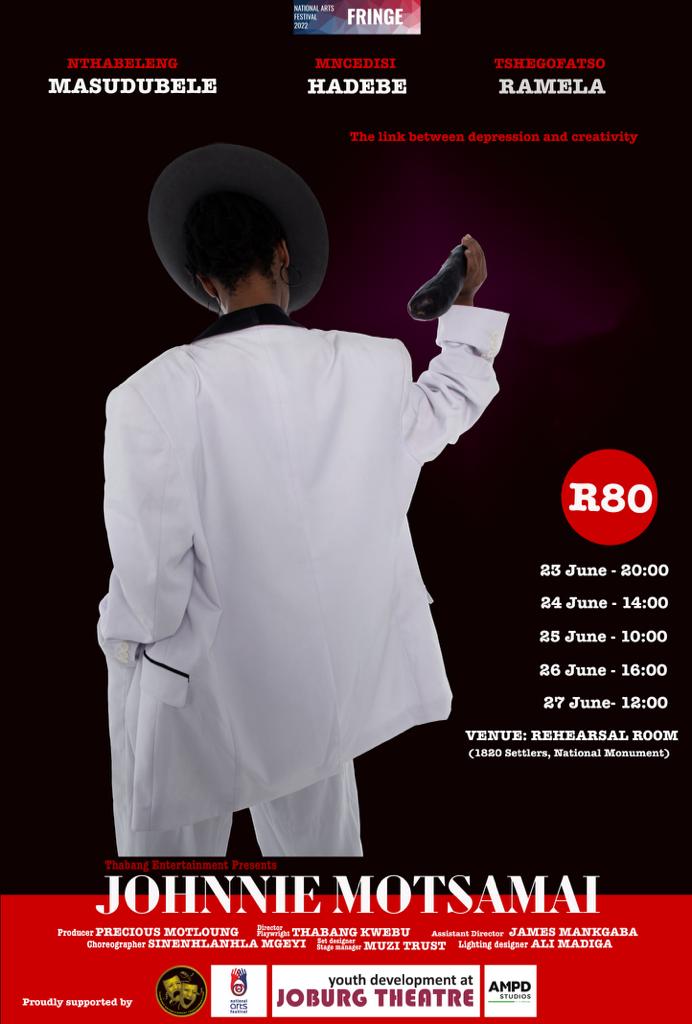 Playwright and Director
Thabang Kwebu is an African actor, director, playwright and filmmaker. He is a proud graduate of the Market Theatre Laboratory (Class 2005/2006) with more than 15 years in the Entertainment Industry.

Assistant Director
James Mankgaba studied performing art at FUBA School of Arts. He acted in the play called The System directed by Seiphemo Alex Motswiri. The play toured abroad and won a Standard Bank Ovation Award in 2015. He also acted Tau, which won at the Zwakala Festival as well as Standard Bank Gold Ovation and Naledi Awards.

Stage Manager/Set Designer
Muzi Trust studied performing art at the Market Theatre Laboratory (Class 2020/2021). He worked with Billy Langa and Mongiwekhaya Mthombeni and their play was nominated for the Naledi Awards. He is a skilled set designer.

Props Designer
Tshokolo Moshoaduba, a creative person with a passion for the Arts. He is a member of various Arts and Culture Initiatives. He is known as King Tito The Hustler in his community.

Choreographer
Sinenhlanhla Mgeyi is a theatre maker, dancer, choreographer and actor who graduated from Market Theatre Laboratory (2016/2017). He began his training under the guidance of Howard “Brother” Dladla at the Zase Laduma Art Centre in Mpumalanga. Highlights of his performing career include roles in Lampedusa Beach, The love of nightingale and the winning touring production “Hani” The legacy. He also performed in Rhinoceros. As a director and choreographer, he has been part of several award-winning productions.

Performers
Nthabeleng Masudubele is a storyteller, photographer and a fine artist from the University of the Witwatersrand. She has obtained a certificate in advanced photography at Market Photo Workshop. She has been the recipient of the Robert Hodgins Award and was also a finalist in the Wits Young Artist Award.

Mncedisi Hadebe is an emerging Storyteller and Theatre Maker. He is one of the founders of a community theatre company called CRAZY CONCEPTS AT WORK. He recently graduated from The Market Theatre Laboratory (2020/2021). He has performed in various plays and his credits include Brainstorm directed by Billy Langa, and Skullcandy directed by Mongiwekhaya Mthombeni.

Tshegofatso Ramela
Tshegofatso is an actress, singer, writer, stage director and poet. She started acting at Sibusisiwe Arts, in 2017 she played in play titled ILIBUYA LIYADLA at Soweto Theatre. And she acted in STOP DIGGING and BLACK and White.