This film centres on Kedibone, a woman struggling to find balance after being sexually assaulted. She is judged for her sexuality by all around her including her mother and is forced to live a double life.

She wakes up one morning to carry on with her daily life but is knocked out of that reality by the nightmare of her experience. While trying to pick an outfit, she struggles to choose between what she feels comfortable wearing versus what she is expected to wear. As she goes through this process, echoes of the sexual assault play in her head. Through her vivid memory of the events, she is reminded of how her boss took advantage of her vulnerability, how the system failed her and how those around her carry out insults, and the lack of remorse thereof.

Through this emotional journey, Kedibone makes a brave decision to start living for herself and no one else. Letter to Society is a story telling of taking back power. 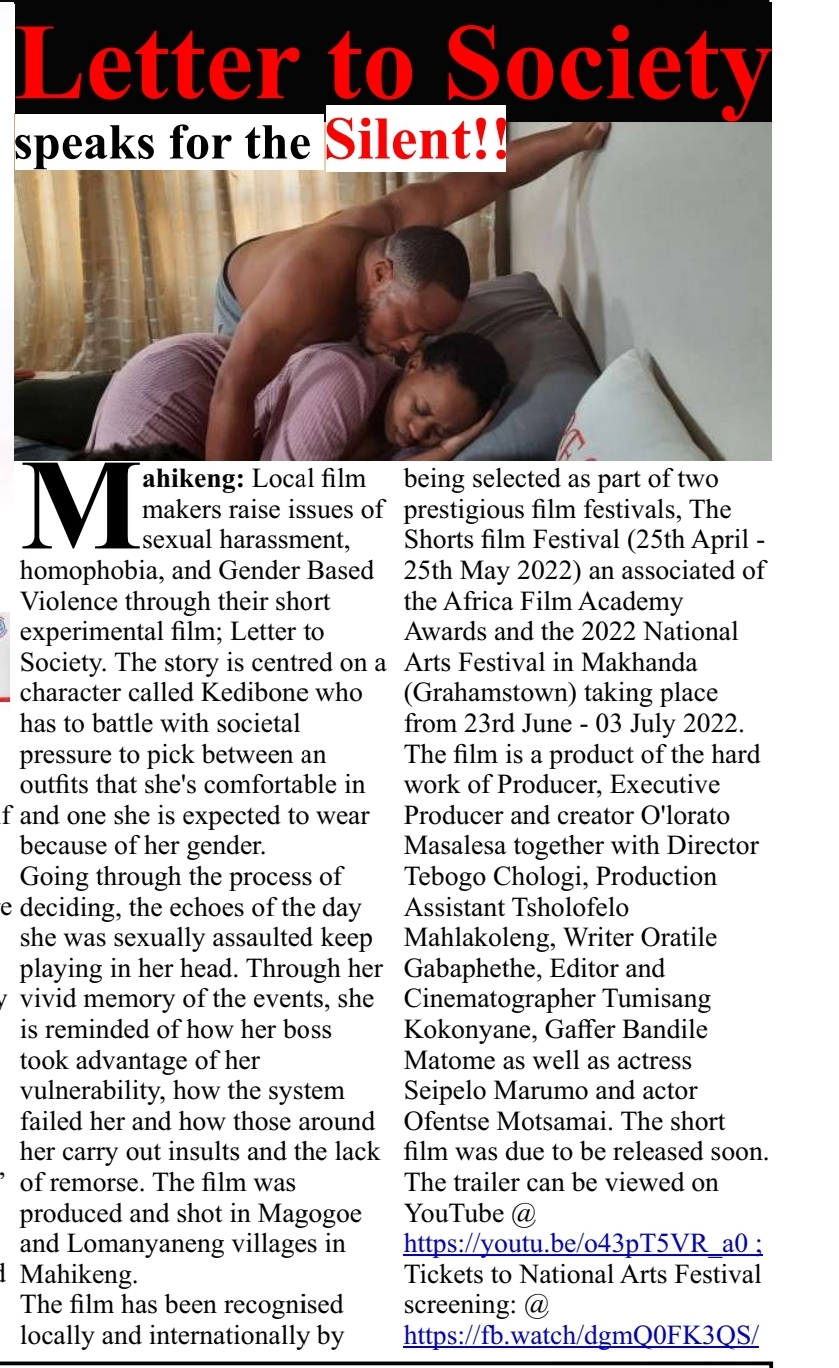 O’Lorato Masalesa was born in 1987 and grew up in Lomanyaneng village, in North West Mahikeng. She is an upcoming film producer who shared her talent with the world through her first experimental short film, Letter To Society. Her love for poetry and the arts grew into a passion for multimedia. This began when she worked in local, provincial and international media houses in Mahikeng, from Mafikeng Mail, Mmega Dikgang (Journalist), and Mafikeng FM (news analyst), and BRICS Journal (Assistant Editor). She was the Publicity Manager for Mona Lisa Production (2020), under Tshego Monaisa who is the writer and director of Single Diaries of a Jozi girl, and the short film Thavhazimbi.

Her first taste of film and working behind the scenes on a production, happened in 2016 when she coordinated the late Motswako Giant Jabulane ‘HHP’ Tsambo’s music video, Pasopa. This was at the height of the ‘Fees Must Fall’ Movement, led by youth in and around Mahikeng in support of the cause. In 2021 during lockdown, she participated in the Women Filmmakers Incubation Development programme called ‘HerStory’, through RatoMillion Media, NFVF and Mmabana Arts, Culture and Sports Foundation. The programme was aimed at empowering and up-skilling talented women from rural backgrounds with a passion for filmmaking through an intensive 3-month incubation. At the end of the programme all the participants were given a chance to produce and direct their short films themed around GBV. Together with her team members, she produced a short film, Sephiri Se Tutetse, and was one of the cast members of a short film called Kago.