A young couple working on a white-owned farm struggles to own their future when their past comes to confront them. A ceremony must be performed before the couple can face their new life together. But will they be able to overcome the struggle of living on land they do not own? 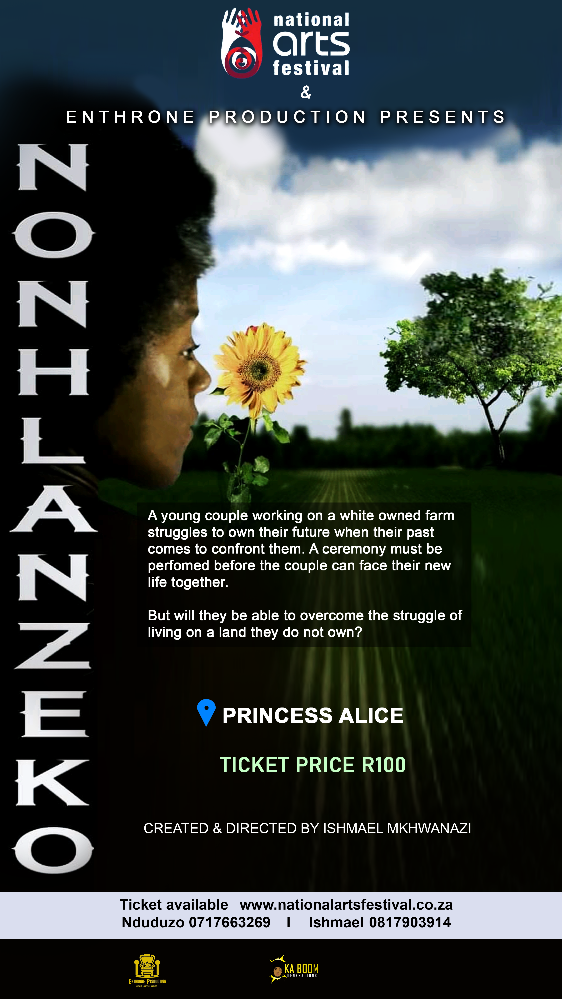 Ishmael Gardener Mkhwanazi grew up in Umlazi township. He was a church boy and played karate. He began his acting career at an early age playing sketches at his church and school. He was inspired by the famous Bheki Mkhwane to become an actor. Ishmael was trained in the community theatre group and he attended many acting, writing and directing workshops.

Ntokozo C. Mkhize (1994-04-15) is an actress, director, and musical director. An upcoming artist, she grew up in Umlazi R Township in KwaZulu-Natal. She studied art at high school (Ogwini Comprehensive Technical High School) and also worked in a community theatre production (uBuhle Bomlazi production). This provided a fertile learning
ground as she was trained by directors, such as Linda Masondo (Mtosh), Xolani Dlongolo and Thandanani Qwabe in acting roles in “The Mask” musical. Film roles have included the role of Wendy in the movie “Farewell”, which was directed by Samkelo Dingi, and a role in the movie, “Indlela”. To further her studies, she completed a B.A. Drama at
the University of Zululand. The degree included theatre and performance studies, musical theatre, directing, acting, visual art and dance.

KHETHUKUTHULA MTHEMBU is a South African actor who graduated from Ogwini Comprehensive Technical High school in 2018, and went on to study Drama and Performing Art at KwaMashu Community Advancements Project (KCAP). He graduated with a professional Actor in Theatre and TV sector while working with local acting groups around uMlazi and KZN and appeared in a few low budget independent films. During the training year at K CAP he appeared in Duncan’s song featuring Thee Legacy Sikelela official music video. In late 2019, he joined a theatre and got an opportunity to be part of the cast of Miracle Makers playing a leading role. In early 2020, he got a role on Grapevine Production eTV (IMBEWU THE SEED) playing Zweli for one week from episode 481 to 485. He is currently working with Brightness Art Production, on a one man show called Answers, directed by Bright Mzimela. Khethukuthula Mthembu is a person who is driven by goals, ambition and a hunger to succeed. The entertainment industry is one for which he has a great passion, and also one which he is extremely determined and dedicated to be successfully in, particularly in the craft of acting.

Nduduzo Shezi is a young performing artist. He works with Enthrone Production, based in Umlazi township in Durban. He is a humble person and easy to work with. He discovered his talent while singing at church. In 2016 he joined a theatre group in the community and performed bible stories at Church. He was trained by Ishmael G Mkhwanazi who is a Director, Creator, writer, teacher and a founder of Enthrone Production. He has performed Nonhlanzeko at the Bat Center and was also cast at kwaMashu to be a part of Makibuye izwe lobaba Mkhulu. He attended a Theater workshop
offered by Umsindo Theater and two master classes offered by Menzi Mkhwane.

Bongeka Princess Mgobhozi is a young, enthusiastic artist from Umlazi a township in Durban. Growing up, she was a reserved child who due to conditionings and childhood traumas became shy, which affected her confidence in verbally expressing herself. It was through Music that she expressed her deepest emotions. In 2017 she rediscovered her love for acting and joined a theater group. Not only did she find healing through art, but it helped her find purpose and herself. She was trained by Ishmael G Mkhwanazi who is a creator, Director, writer, teacher and the founder of Enthrone Production. She performed in various projects including interrogation room, John the Baptist and Nonhlanzeko which were Directed by Ishmael G Mkhwanazi. She attended A theatre workshop Offered by Umsindo Theatre Projects and she also attended two master classes offered by Menzi Mkhwane.