The Complete Works of William Shakespeare Abridged A New Variant

The Complete Works of William Shakespeare (A New Variant) is a laugh a minute, it could be even more, but you have to be pretty fast to catch every ad lib and witty remark from the silver tongued cast. The quick changes and sometimes seemingly bungled lines not only serve to entertain but ensure that you are kept on the edge of your seat. Your face will hurt from laughing, from beginning to end as they trot through ALL the plays and sonnets by The Bard.
There truly is method in the madness! 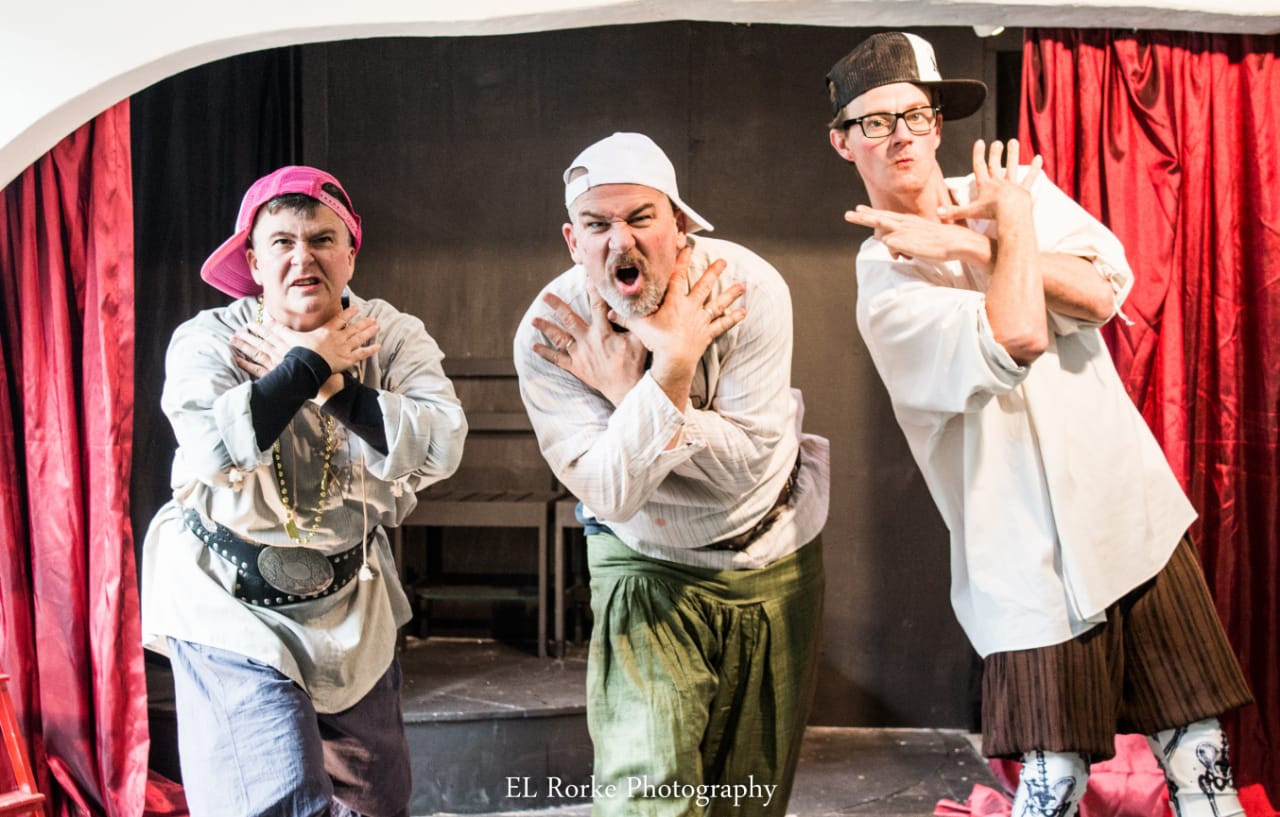 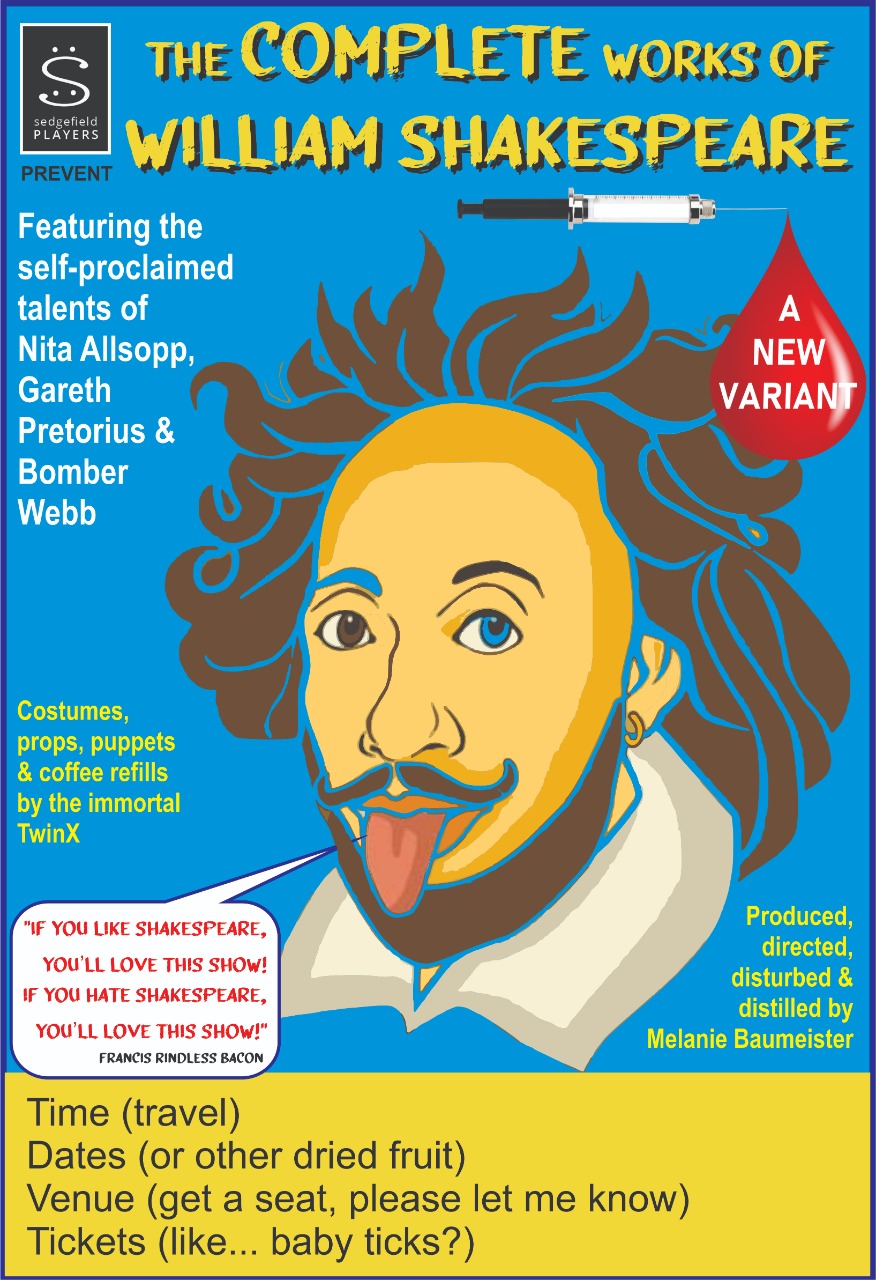 We perform under the banner of Sedge Players, a Community Theatre troupe. From pretty much all walks of life from medical to print media and everything inbetween our troupe is surprisingly talented, with high energy and a crazy compulsion to make people smile and quite possibly guffaw at our foolish antics.

Nita Allsopp: Currently serving as a nurse at our local government health clinic, Nita has been hell bent on performing her heart out since high school taking part in any show and community theatre that will have her. During the pandemic she took to YouTube to learn the ukelele to serenade anyone who would listen – and we were all blown away by her natural talent. A shining star in The Complete Works, Nita keeps the audience laughing and on the edge of their seats with what wig she will appear in next.

Jacqui Troy Arnot: a retired business woman and full time bohemian, Jacqui takes up the role as Assistant Stage Manager for The Complete Works. Hailing from a long line of talented ancestors in Ireland, Jacqui is an old theatre bug, usually caught swanning about on the boards and not in the wings. Making this production her debut performance behind the scenes. Jacqui is also our Prompt when she’s not ripping off tunics and handing out fencing foils or drawing up stage blood for the Titus Andronicus scene.

Melanie Baumeister: Producer and Director of Amateur (for the love of it) Productions for the last decade, Melanie studied a BA with Drama at Stellenbosch University and went on to waitress to support her Theatre habit. Only to fall into the routine of a regular salary as a Rehabilitation Pilates instructor with a penchant for the dramatic. Sedgefield lucked out when her little Theatre, Studio 42, opened its doors 6 years ago and saw the entertainment quota rise to new levels with productions from Midsummer Night’s Dream to hosting travelling stand-up comedians, story tellers, magicians and musicians passing through the little town. Right up until the night before Covid hit and dormancy was enforced until March 2020!

Linda Ormond: TwinX Costumes, named before the Internet, takes this production to the stratosphere with authentic looking Medieval props and wardrobe. Linda has a passion for detail and comedy and the two are combined perfectly in her execution of the visions of both the demanding cast and their director. Ms. Ormond is a self taught, self made, highly motivated individual that is fondly referred to as ‘Fanta’ as a Ranger at Africa Burn because when you are with her The Fun Will Find You. In other aspects of her life, Linda is a retired doctor – making sure that if anybody does need stitches, she has her overlocker on standby. Lastly, incredibly, Linda also runs a pottery studio in Sedgefield with a bevy of talented students, she creates magnificent earthenware and terracotta pieces for homes and gardens all over the world.

Gareth Pretorius: Lives on a small holding with his wife and a menagerie of animals, from horses to cats, bees, bats and a 3-legged dog. He often lies awake at night thinking that, “If all the worlds a stage, then who’s sitting in the audience?” When he is gainfully employed, it is as a Learning Designer. But at heart, he’s a wanton thespian and psychotherapist who weaves theatre and therapy into classes and workshops that merge the realms of role play, movement and the occasional Faustian landscape. Gareth is always the first to put his script down and encourage the use of ad libs in his co-stars so that he can bounce his hilarious puns and commentary on modern society around the stage to make them corpse.

Bomber Webb: Probably the most trustworthy (unless you need him to be on time) of this merry band of thespians, Bomber is obsessed with facts and the truth because he is the editor of the local newspaper in Sedgefield. The Edge Community Newspaper is the last bastion of independent press on The Garden Route and Bomber makes sure (with the help of a very patient wife) that it hits the streets in hardcopy every fortnight. He has been performing since he was born as the youngest of four, simply to be noticed in the outback of Zimbabwe. He is also an accomplished singer and is known to belt out any song, except anything by ABBA. A sought after MC and public speaker, Bomber clears his mind with amber nectar and marathon running and television series watching.