Nico is locked down with a group of artists isolating together in an artist residency. Unable to perform her original project as no one is allowed on or off the premises, she has to come up with another to legitimise her presence at the residency, and her sex work practice as ‘art’. The liminal conditions of a level five lockdown seem to create a place beyond time, bringing new opportunities and problems to the performance of intimacy, that further blur the uneasy boundaries between fact and fiction. 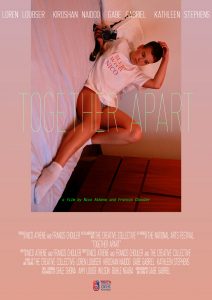 Written and produced by: Francis Chouler and Nico Athene

Created with and filmed by: The Creative Collective

With additional performances by:

Directed by: Francis Chouler and Nico Athene and the Creative Collective

Loren Loubser: Since graduating with a BA in theatre and performance from the University of Cape Town in 2012, Loren has worked extensively as an actor and filmmaker across the country. From God is a Womxn by Tara Notcutt, Nasty Womxn by Dara Kometz (with an extended run due to public demand) to Niqabi Ninja by Megan Furniss (with many reoccurring performances due to public demand), An Absolute Turkey by Chris Weare, High Fantasy (feature film) by Jenna Bass, which is still touring world wide, Lifting Nic (short film) by Ian Gabriel & a collection of online queer short skits with Gabe Gabriel titled Queer Things, to mention their favourites. Loren is also in post-production with their own documentary. They went on to use this training and experience in social justice work with communities like their own. In 2014, Loren became a co-director and co-founder of FEMMEPROJECTS, a queer-owned, youth-led NPC created for the development of a Comprehensive Sexual Education (CSE) and Sexual & Reproductive Health & Rights (SRHR) curriculum for high school learners enrolled at under-resourced schools based in rural and urban communities across the Western Cape, South Africa.

Gabe Gabriel: Gabe is a queer South African filmmaker based between Cape Town and Los Angeles where they have been working as a screenwriter, actor, director, and independent film producer since 2013. Currently, Gabe is working as a writer-for-hire on Granny Lee, a feel-good South African dramedy about the transgender icon for Canada’s Fae Pictures; Mavis and Grace, a Thelma-and-Louise-type buddy cop Western for Amy Jephta’s Paperjet Films; Sabela Gold, a five-season gritty gold-rush crime drama with Danny Glover’s Louverture Films spearheading development, and two seasons of Mother City, a psycho-sexual neo-noir drama series helmed by Christiaan Olwagen and commissioned by major SA broadcast channel, MNET. As of 2019 and under the direction of Marche Media CEO, Nomi Matlala, Gabe and long-time collaborator Loren Loubser founded the collective, Queer Things, a duo of naughty shits who hash out all things queer on various online platforms.

Kiroshan Naidoo: Kiroshan is an award-winning film and stage actor based in Cape Town. He graduated from UCT with a BA in theatre and performance in 2015. In 2016, he was awarded the prestigious Fleur du Cap Theatre Award for Most Promising Student. He has since been seen in numerous theatre productions such as Reparation (by Ameera Conrad) in the role of Bhavik Mohammed, which ran on the National Arts Festival Arena platform. Louis Viljoen’s The Eulogists, which premiered at the Fugard Theatre, in the role of Zee, and most recently in Neil Coppen’s Lalela Ulwandle in the role of Niren. Kiroshan’s film and television credits include National Geographic’s Origins: The Journey of Humankind, directed by Simon George and BAFTA TV award winner Niall MacCormick, where he portrays the historical figure, Ramzi Yousef; Love Jacked, directed by Alfons Adetuyi starring three-time Emmy winner Keith David and Maya Stevens West; Universal Studios’ Tremors 6: A Cold Day in Hell, in the supporting lead role of Hart Hansen alongside Michael Gross, Jamie Kennedy, Rob van Vuuren, and most recently he was cast in the lead role of Christo in a Showmax Original called Woke in Progress, directed by Reabetswe Moeti.

Kathleen Stephens: Kathleen is a fresh new face to the theatre and performance scene in Cape Town. She majored in theatre making at UCT and in the last year and a half has been building her name as an actor and director.   In 2016 she debuted her acting career in the production People Beneath Our Feet at the NAF. Since then she has gone on to star in Wessel Pretorius’ I Love You Sally Field, Dara Beth’s Nasty Womxn, and Jon Keevy’s Single Minded and The Underground Library, which was the first recipient Fleur du Cap award for Best Children’s Theatre Production. In 2018, Kathleen performed on the Maynardville stage as Lucentio in the first all-female South African production of Shakespeare’s The Taming of the Shrew, directed by Tara Nottcutt, Pretorius’ Fotostaatmasjien which debuted at Woordfees Festival and KKNK, Like Hamlet directed by Kanja Viljoen, and The Fugard’s return season of Shakespeare in Love. Last year, she attended the Edinburgh Festival as the director of Ameera Conrad’s Tales From the Garden.

Sihle Shona: Cape Town-based actor and speaker Sihle Shona is one of the brightest young artists in the South African theatre and film industry. From humble beginnings between Gauteng and the Eastern Cape, Sihle now holds an Honour’s degree in theatre and performance from the University of Cape Town. In 2016, he co-wrote and performed in the Baxter Theatre’s The Fall (critic’s choice in The New York Times). Sihle travels often, has performed and talked on stages in Europe, the United States, and Australia. He is a founding member of Age of the Artist, a community of free-thinking, and self-sufficient artists. Sihle is passionate about storytelling and arts education. He works closely with young kids and outer city youth through PRAESA and STEP and occasionally coaches acting for students at the University of Cape Town. He takes the lead role in The Lifesaver and Neo in Rage, currently streaming on Showmax.

Amy Louise Wilson: Amy Louise is a performer, writer and co-founder of the Lo-Def Film Factory, a pop-up experimental community cinema collective. Since graduating from Rhodes University and the University of Cape Town with an Honours degree in drama, she has appeared in numerous local and international film, television and theatre productions. Notable credits include Fox’s The Book of Negroes and the Netflix series Troy: The Fall of a City. Theatre credits include the Fugard Theatre’s The Father and The Mother. She has been experimenting with creating solo performance, beginning with her living-room performance-lecture Other People’s Homes, which she created in New York. Her new play, Another Kind of Dying, won the 2020 Distell National Playwright Competition.

Buhle Ngaba: Buhle is a multiaward-winning South African actor, writer and speaker. She studied acting and contemporary performance at Rhodes University and processes of performance at the University of Leeds (UK). She performed in the world premiere of John Kani’s play Missing at the Baxter Theatre (SA) and went on to tour internationally with the production, which earned her nominations for Best Supporting Actress for a Fleur Du Cap Theatre Award as well as the Naledi Theatre Award. In 2017, she won two South African Kanna Theatre Awards including Best Upcoming Artist for her first play, Swan Song. Buhle was nominated for a Fleur Du Cap Theatre Award (2018) for Best Leading Actress for her performance in What Remains, a play by Nadia Davids and multiaward-winning director, Jay Pather. As an author (The Girl Without A Sound), Buhle seeks to promote diversity in children’s literature and to develop the legacy of storytelling among the youth. Buhle was recently awarded the Rising Light award at the Mbokodo Awards for Women in the Arts.

Francis Chouler: Francis received his honours degree in theatre and performance, cum laude from the University of Cape Town in 2010. He appeared at the National Arts Festival in Born in the RSA, presented by the Baxter Theatre Centre, and in The Ovation award-winning Cock on the festival fringe. Film and television work includes the upcoming Prisoner 760 with Jodi Foster and Benedict Cumberbatch, Eye in the Sky with Alan Rickman and Helen Mirren, and The Crown opposite Claire Foy. Theatre includes four seasons of Shakespeare at Maynardville Open Air Theatre (Twelfth Night, As You Like It, Taming of the Shrew and Cardenio). In 2019, Francis produced and performed in his first solo theatre production, Nocturne, by Adam Rapp, for which Emily Child was nominated for a Fleur du Cap as best new director. Francis is a member of the Long Shots Improv Troupe and has been a board member of the South African Guild of Actors. Together Apart is Francis’s debut producing and co-directing for the screen, and is based on a screenplay written together with the artist and filmmaker Nico Athene.

Nico Athene: Nico is a body of colliding personas and intimate intricacies: of political and personal, immediate and distant, academic and under-qualified. Born and raised in Cape Town, South Africa, she received two degrees (neither related to art) and workedfor  a number of years in the creative film industry before giving up her ‘real name’ to become a stripper in a Cape Town club in protest against the invisible sexual/gendered labour she felt obliged to perform in the film industry. If she was going to be doing it anyway, she may as well be properly paid. Actually, it’s because she always wanted to be a dancer. It was here that she was born – a symbol of demonised femme stereotypes with a mandate to use artists and their institutions to up her cultural capital. In 2019 she began her MAFA at the University of Witwatersrand with the assistance of an Andrew Mellon Foundation and Wits Research Grant. She is currently attempting to invoke alternate selves that transcend the institutionalised and transacted femme body, through the collapse of temporal, sentient and institutional boundaries. Athene is a Sasol New Signatures 2019 Merit Award Winner.