ICU is a set of new works conceptualized, directed and curated by Mandisi Sindo of KASI RC.  Fusing theatre, music, dance and the visual arts, ICU is a haunting reflection on the contemporary moment, the responses of those who have lost loved ones to the COVID-19 virus. It is an experience of mourning, a realization of loss and a moment of dealing with loneliness, depression, anxiety and confusion. 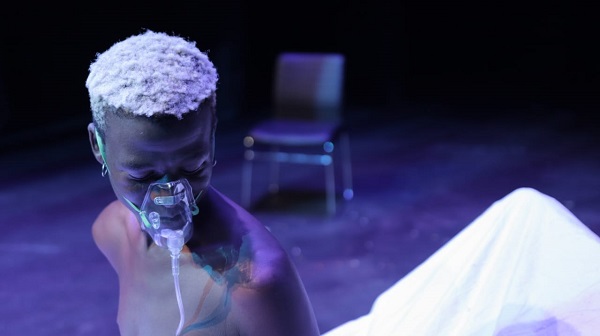 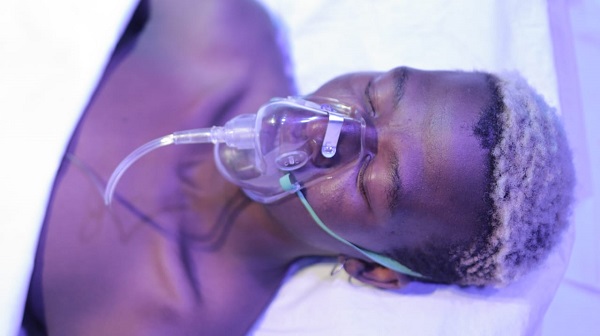 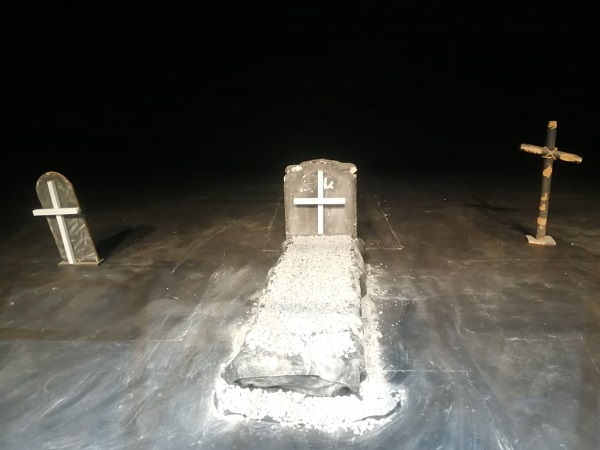 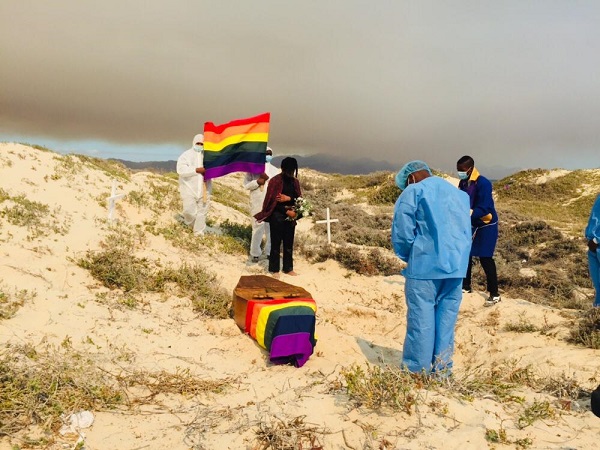 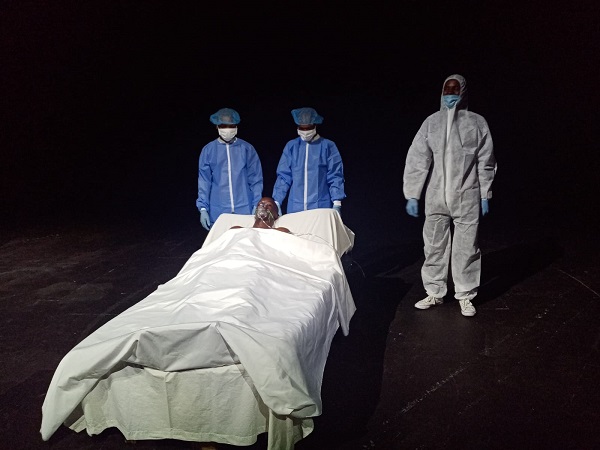 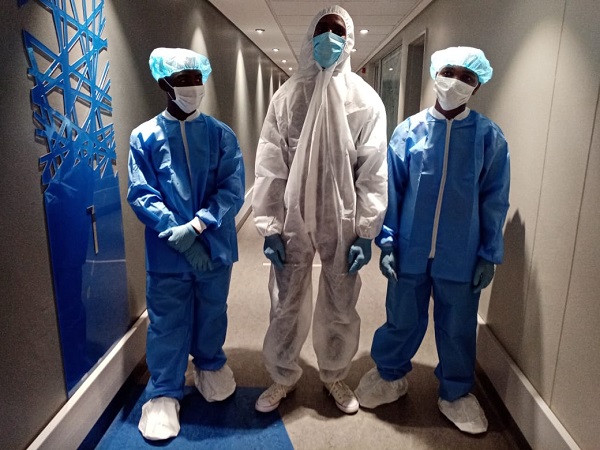 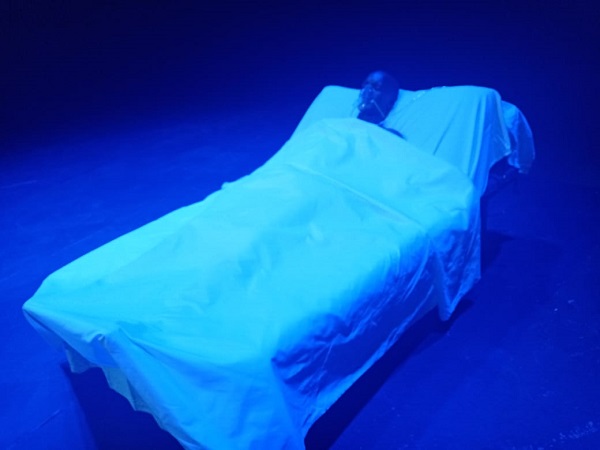 Mandisi Disi Sindo is a 2017 Institute for Creative Arts National Fellow, 2017 Innovation in Theatre Fleur Du Cap Recipient, 2019 eTV & eNCA South African Hero Recipient, 2019 USA IVLP Alumni, and an established theatre and public art practitioner.  Mandisi prefers to be recognized as an ARTIVIST, he is also a South African actor, presenter/mc/host, writer, director, voice over artist.  He is the innovator behind South African Shack Theatres. He recently built a world class Shack Art School & Theatre in Khayelitsha known as Khayelitsha Art School and Rehabilitation Centre – (KASIRC). Sindo’s motto is to ‘Inspire the Uninspired, Inform the Uninformed and Educate the Uneducated’.

Mpendulo Mabindisa known as Motion Billy is a Cape Town based music video/ film director and entrepreneur who have worked with the top South African musicians on their visual projects. The likes of AKA, A-Reece, Kwesta, YoungstaCPT, Stogie T, Zakwe, Amanda Black etc. and has since shot and directed mini documentaries for Trace Africa and a promo series for a Medical Aid company featuring AKA, Nomzamo Mbatha, DJ Tira and Skhumba. A Khayelitsha native, Mpendulo graduated from Cape Peninsula University of Technology with a National Diploma in Film and Video Technology. His early days of volunteering at Media Film Service provided a foundation of practical experience upon which he developed further at college and moved on to work with some of South Africaʼs greatest talent. Through his work Motion Billy has hosted free workshops in townships surrounding Cape Town and has created programs that helped a number of young people to start their journey in filmmaking. Motion Billy runs seminars and talk shows such as Broke Billionaires, Winners Room and mentors young and aspiring film and video makers in the townships with KASI RC.

Siziphiwe Ngqoyiyana is a film producer, cinematographer and photographer and also highly involved in making soundtracks for independent films, producers and creative practitioners. Having to leave tertiary education early due to funding constraints was an obstacle for Siziphiwe, however, through attending workshops and mentoring sessions in and around South Africa, she found a way to make films and create work for herself.  Subsequently, Siz has produced content for well known South African songstress, Berita. In 2020 Siziphiwe saw a need to launch her own media company: Internext Connect Studios.  The primary focus of Internext Connect Studios is film, photography and music.  In addition, the company focuses on young women and skills sharing in the film, photography and music industries.

Mesuli Nale was born and bred in Cape Town, South Africa. Nale was a middle child, raised with his two siblings by a single parent.  During school he focused on the Dramatic Arts and Dance Studies at the Chris Hani Arts and Culture High School and matriculated in 2013.  He went on to join Indoni Dance Arts & Leadership Academy 2014 and graduated in 2017, this is where he pursued dance and choreography.  In 2018 he paved his own path as a freelance dancer performing in various dance works locally and internationally. He continues to perform and move international and local audience with his storytelling and dance as a freelance dancer, performer and model.  In 2019 he undertook a community health-building initiative and started his own gym in a small rented garage, calling it, Healthy Garage Fitness focusing mostly in uplifting young girls and men in his community, currently the gym is a home to 27 youth members.

Vuyolwethu was born in 1996 and joined Dance For All in 2008 where she became inspiration by the likes of Kevin Muller, Hope Nonqonqo, Philip Boyd, Lorrain Ndindwa, Bruno Wani, Christopher Kindo, Mziyanda Mancam, Sbonakaliso Ndaba, to name a few. Thabisa Dinga remains her mentor for whom she has the utmost respect and admiration. Vuyolwethu graduated from the Jazzart Dance Theatre’s three-year training programme in June 2018 and joined the company as a professional performer and teacher. She performed as part of Jomba Festival, Durban and Dance Umbrella 2019 in Cape Town, as well as others. Vuyolwethu had the pleasure to tour Amsterdam performing Amaqhawe choreographed by Mzokothula Gasa and The Sibonelo Dance Project during Afrovibes festival. In 2020 she was part of Elvis Sibeko’s Kingdom of Ubuntu Musical, Maak My Famous Season Final, Body of Evidence with Mud and Fire Parables and on a music video with the award winning Jeremy Loops and Stone “Move” Galela

Sinesipho Peter was born in Khayelitsha, Site B. He is known as Bravo Le Roux on the streets of Cape Town as a hip hop artist. Bravo Le Roux has over 10 years of recording artist experience Highlights in his career include his 2018 performance on Nasty C’s ivyson tour and AKA’s Megacy Tour in 2019. This was just after he made it to number 7 of Shiz Niz’s SA Top 10 underrated MC’s alongside Tellaman, Blaklez, Touchline and many more. During the lockdown environment of 2020, he has been participating in online events, including those of the famous Rands Cape Town and Selective Live Sessions, with various interviews from the likes of DJ Switch and DJ Fabo.  He released 6 music videos in 2020 including the street banger, “Ta Bravo’s Interlude” that caught the attention of Lenox Bacela, Naak Music, and Kyeezi. During the hard times of Covid 19, he has been identified by Western Cape Government as one of the most influential individuals of Khayelitsha to take a stand and be the voice on Covid 19 awareness.

Lusanda Dayimani is a talented, trained professional actress and dancer. Her artistry started at a young age at Iqhude Theatre Productions which was formed and founded by Thembelihle Mananga.  After being introduced to the performing arts she performed a number of productions with the company. At the age of sixteen, Lusanda traveled to Singapore to perform for the first time.

Dayimani enrolled at the New Africa Theatre Academy in 2009 before joining Magnet Theatre for 2 years. And in search of her own performance language, she went to train at Jazzart Dance Theatre for 3 years. In her journey of making theatre in 2017 she collaborated with Nkemiseng Khena. Lusanda Dayimani is now a professional dancer and resident dancer, teacher and facilitator at Sibonelo Dance Project and a freelance.

Buhle Thembisile Stefana is a dancer, actor and a reciting/writing poet. Buhle started dancing in 2008 at Arts of Modelers Dance Company (ATM) in the Eastern Cape where he became a lead dancer in the company.  In 2014 he matriculated from Zanempucuko S.S.S and the following year was appointed as a Junior Choreographer until 2018 December when he moved to Cape Town.

He became a mentee at KASI RC Shack Theatre in 2018, under mentorship of Mandisi Sindo and Liso Sindo. He went on to study and graduated at Jazzart Dance and Leadership Program & also joined the Magnet Theatre program. In 2020 he was appointed as KASIRC resident choreographer.  With KASI RC Buhle created the works: Differences, Ezothando and Expectations.

Liso The Musician is a Best Performance in Music nominee from the 2017 Cape Town Fringe Festival, South African Ancestral Jazz innovator, composer and an actress.  She is a major talent emerging from Khayelitsha and her musical brilliance is evident in her singing and stage performance.  Whether performing at the Shack Theatre stage or in a large auditorium, she holds her space as an entertainer like very few others can.  Liso plays a very distinctive form of African Music called Ancestral Jazz, which blends the styles of Umombelo, Umgqungqo, imilozi, and Afro Soul.  This strength has won her multiple awards and achievements including Best Vocalist at Klein Libertas Festival, Radio Zibonele Best Afro Pop Music 2018 Nominee, performance at the 2019 NAF Standard Bank Ovation Awards, 30th Up The Creek Festival 2020 Arts Women Festival, 2020 Icamagu Festival and has her music on all digital platforms including professional music videos on YouTube.

Thandiwe Msebenzi was born in 1991 and works primarily in photography. She grew up in Nyanga, Cape Town and graduated from Michaelis School of Fine Art in 2014. In her final year she was the recipient of the Tierney Photography Fellowship Award. In 2015 she became part of iQhiya collective taking part in the AVA iQhiya solo show, the FNB Joburg Art Fair, and Documenta 14. In 2016 Msebenzi was placed in the ABSA L’Atelier top ten and completed a four-month residency at the Cape Town School of Photography culminating in a solo exhibition. She has been a speaker at the Design Indaba. Msebenzi currently works in her studio at Greatmore Studios in Woodstock.

Lewellyn Afrika is a perceptive, disciplined and creative individual working as a theatre performer and educator. After graduating in 2014 from Jazzart Dance Theatre, Lewellyn then furthered his studies at the Cape Academy of Performing Arts under the direction of Debbie Turner.  His majors including classical ballet, African dance, contemporary dance, dramatic arts and musical theatre and physical theatre, he graduated in 2016.  Since 2017 he has worked across various roles in professional dance, research & development towards creating new works as choreographer, facilitation of youth education workshops.  He has also assisted with high school dance programs and has been teaching fitness at the Eersteriver Multiple Centre. Lewellyn has worked as a freelance performer in works as part of the Cape Dance Company, F08, Darkroom Contemporary Dance Theatre, The Fugard, Baxter Theatre, Jazzart Dance Theatre, KYKNET Fiestas, Infecting the City Festival, National Arts Festival, Dance Umbrella, and Artscape.

Slovo Magida is a South Aafrican tenor musician currently based in Cape Town, Khayelitsha. Magida has been trained at the South African School of Music (UCT) and worked at Artscape and abroad. Slovo has sung in various countries in Europe with major triumph in Italy singing the Opera Tosca.