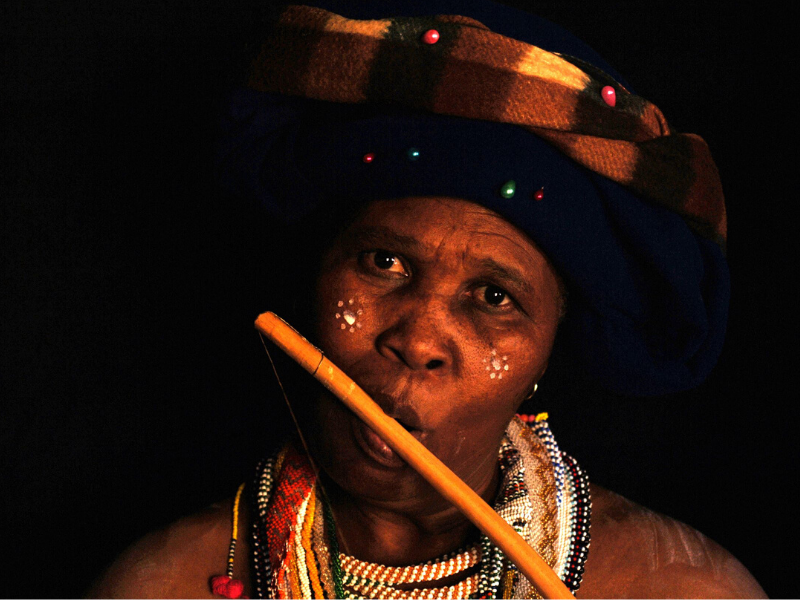 The National Arts Festival annually pays tribute to an artist who has made a significant mark on the country’s arts landscape and, this year, the fitting recipient of the accolade of Featured Artist is indigenous musician Madosini Latozi Mpahleni, best known as simply Madosini.

“Madosini is our national treasure. She has kept alive the tradition of Xhosa music rooted in oral tradition, in particular the distinctive sound of the uhadi (music bow), umhrube (mouth bow) and isitolotolo (Jew’s harp). A musician, composer and storyteller, she also makes instruments, has performed and collaborated widely, and continues to teach the body of knowledge she has carried over her lifetime. We are proud to feature her sonic and cultural legacy at this year’s National Arts Festival,” says National Arts Festival Artistic Director Rucera Seethal.

As the 2020 Featured Artist, Madosini will perform in two collaborative performances at the National Arts Festival in Makhanda (formerly Grahamstown), which runs from 25 June to 5 July this year. Her first will see Madosini performing with members of her traditional ensemble from Libode; and her second will be a kind of thanksgiving to her supporters and for her good health. This performance will include her friend Pedro playing the traditional ixilongo flute as well as various special guest musicians. Madosini will also present a musical storytelling performance for children and several bow-playing workshops to arts educators and musicians.

Madosini was born in 1943 in the Eastern Cape, growing up without formal schooling. She only speaks isiXhosa, though in many ways she has superseded translation through her musical language.

Madosini has performed internationally for many years including at WOMAD festivals where she was the first artist to be recorded and documented as part of their Musical Elders Project. Over the years she has performed with renowned artists Ringo, Thandiswa Maswai, Derek Grepper, Hilton Schilder, Gilberto Gil and many more. The overwhelming support she received from South Africans during a trip to France in 2019 to facilitate her safe return home after health issues was testament to the place she occupies in our national identity and heritage.

Nobesuthu Rayi, the National Arts Festival’s Executive Producer, says: “We are extremely grateful that we will be given the opportunity to honour Mama Madosini on her own soil and we feel sure that the people of the Eastern Cape and South Africa will join us in celebrating this extraordinary woman. Sithi Halala Mama uMadosini, siyababulela abaphantsi ngawe (We thank the ancestors for your life).”

The 2020 National Arts Festival takes place from 25 June to 5 July.