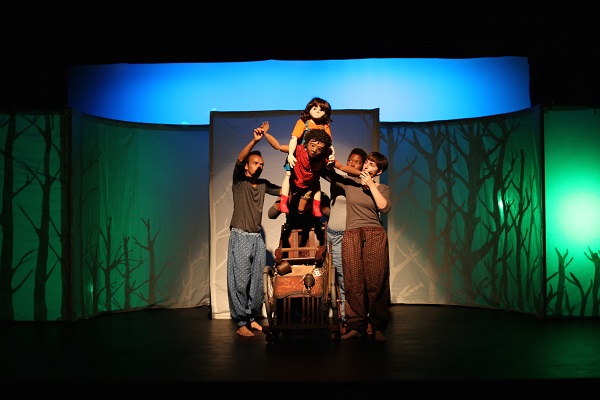 This year, the ASSITEJ Family Fare Platform presents a rich diversity of 14 productions – entertaining, thought provoking and engaging show that aim to give families the opportunity of ‘growing up and growing together through theatre’.

Red Earth Revisited by Speelteater Holland and ASSITEJ SA is a re-imagining of the events around the Xhosa prophetess Nongqawuse, seen through the eyes of a migrant stork. The production stars local actors Macebo Mavuso, Thami Mbongo and Roshina Ratnam as well as a chorus of South African and Netherlands-based artists, and uses puppetry, movement and song in vibrant and interesting ways. It will tour the Eastern Cape after the Festival.

True Confusion by ZeBu (Denmark), aimed at ages 8 to 13, is a physical interpretation of the situation where children find themselves paradoxically accepting their reality while asking hundreds of questions. It is a playful, challenging and interactive dance production that has toured extensively internationally and will be performed on South African soil for the first time at the Festival.

A exciting local dance production is Once Upon a Fire by Briony Horwitz, co-directed by Nkosinathi Gaar and choreographed by David Matamela (a judge on the South African edition of ‘So You Think You Can Dance’). Aimed at audiences aged 5 – 11, Once Upon a Fire revives the ancient art of story-telling through dance and enchanting shadow puppetry. This production has been created under ASSITEJ South Africa’s mentorship through the director’s involvement in the Inspiring a Generation programme, which gives emerging South African artists opportunities for international collaboration and exchange.

There are also a number of performances that address issues such as social injustice, crimes against humanity, disability and inclusivity in exciting and challenging ways, providing the opportunity for starting conversations with young people around important issues:

With decades of experience, veteran Durban clown Adi Paxton returns with Double The Fun, a production made up of magic, clowning and puppetry for ages 3 and up.

The Keiskamma Academy presents Indalo. Directed by Mojalefa Mokanya, Indalo is performed by a 22-piece orchestra and 10 storytellers. The story is set in the Eastern Cape and explores the deep and magical relationship between animals and the amaXhosa by weaving together different strands of artistic expression: music, storytelling, physical performance and visual art.