We asked theatre maker Jemma Kahn, this year’s Standard Bank Young Artist for Theatre, what she’s been working on for this year’s National Arts Festival. This is what she said…

Francis Bacon and Lucian Freud – the two British painters on whom my new play, THE BORROW PIT, is based – are referred to repeatedly as risk takers. They liked to gamble. They liked to do illegal and dangerous things. Bacon liked to fling paint at his canvases, risking the destruction of hours of careful work.

I am not a risk taker by nature. Though my work is often referred to as ‘brave’ (a word that smells suspiciously like a back-handed compliment), there has not been too much risk involved with any of my productions. They have been small and cheap and meticulously planned. Sure, one always runs the risk of a play falling flat, but I have been sensible and mitigated as best I could. Until now. With The Borrow Pit I, like my subjects, am throwing caution to the wind. I’m scared.

It was advised that I work from an existing script for the Standard Bank Young Artist piece. I did not do this, writing from scratch (and I am not a writer). This play will also be the first time I have directed my own work (another thing I was advised not to do), and I will perform in it as well. In one scene a character I play needs to kill another character played by me – one of many, many things I’m not exactly sure how to achieve. Do my fellow actors know how little I know? 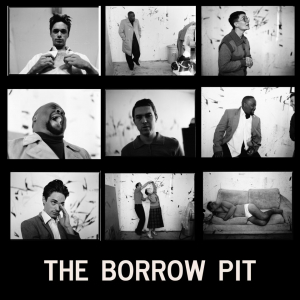 The biggest risk on this project for me is the style of the drawings. Freud in his later years dismissed Bacon as ‘an illustrator’, which I guess is someone who narrates with pictures – clearly an approach that according to Freud falls far below ‘painter’ on the artistic ladder.  I have made a pretty good name for myself ‘narrating with pictures’. So then why now I am trying to paint? It’s foolish. Every day when I go into my studio I say to myself, ‘Jemma you don’t have the time to  bugger this up. There has to be something on stage in 6 weeks.’. And then I fling paint around.

This play might puncture my career. People might say, ‘She bit off more than she could chew’ or, ‘Why did she make a play about dead British portrait painters’ or, ‘I didn’t understand it’ or, ‘It was hysterical’ or, ‘It was sentimental’ or, worse, ‘It was boring.’ . Worst of all I imagine my collaborators whispering behind my back, ‘Shame, she really fucked it up…’

BUT.  It feels absolutely right that the subject matter of this play be dealt with in a risky way. So that’s what I’m doing. I’m taking a risk.

? All photos:Jaco B Van Schalkwyk