Given the current climate in the country, South Africans are in dire need of a good laugh – and, thankfully, there’s no shortage of hilarity on the programme of this year’s National Arts Festival, which runs from 29 June to 9 July.

Headlining the comedy bill is British ‘laughter master’ Stephen K Amos, who will be performing for the first time in South Africa when he brings his World Famous routine to the Monument stage for two performances only (2 and 3 July).

Amos, who lives in south London, is a 25-year veteran of the stage. Perhaps best known for the masterful way he engages and manages his audiences, he is a regular on the UK comedy circuit. Amos performed at the Edinburgh Fringe for the first time in 2001, and has returned every year since 2003. At the 2006 Fringe, he publicly acknowledged his homosexuality for the first time in his solo show, All of Me. He is a regular at the Melbourne Fringe, performing to sell-out audiences and excellent reviews.

‘The laughs came thick and fast throughout. Amos’ manner is warm and his friendly and comfortable banter with the audience a highlight. Don’t miss it.’ – Nicole Precel, The Age

Amos,  doesn’t shy away grittier, difficult topics – grief, obesity, fake news, homophobia, casual racism – using humour and razor-sharp observations to tickle our brains as well as our funny bones. In an interview with the Guardian in April this year, Amos digs into his style of comedy: “If I at least make someone think, or put a spin on something that might change their point of view, that is good. I do my show for laughs, not necessarily applause breaks, if that makes sense? You know, people sitting there going, ‘Yes, he’s right. Yes! Ra-ra-ra.’ I want you to laugh and then I pull the rug from under your feet by making you think about quite important points.”

Get a taste of what’s in store in the clip below (Warning: Strong language)

Two other fabulous British comedy acts will make it to Grahamstown this year – direct from sell-out successes at Brighton and Edinburgh: Police Cops by the Pretendmen (laugh-out-loud physical fun) and Louise Reay’s It’s Only Birds – performed entirely in Mandarin that, bizarrely, everyone will understand!

Also on the Main programme is the fifth instalment of The Very Big Comedy Show, em-ceed by Rob van Vuuren (5 July). AND the Mamba boys are back! Catch Ben Voss and John van der Ruit in Mamba Republic at Victoria Theatre (2 – 8 July).

Laughter on the Fringe 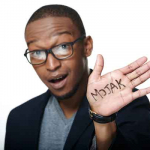 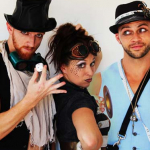 And the good old-fashioned, wildly funny, sometimes topical comedies such as Aaron McIlroy and Lisa Bobbert in Marriage for Dummies, Daniel Mpilo Ricahrds in Mike van Graan’s Pay Back the Curry and State Fracture, James Cairns’ Against Humanity, Conrad Koch as Puppet Guy, crime comedy in The Book Detectives and Butlers and Bloopers, improv by Jittery Citizens (Comedy Experience) and PickledGinger (Apologies in Advance), and, of course – Raiders!