Neo Motsatse’s 2019 National Arts Festival show, Seasons: Dorothy Masuka Songbook in the style of Vivaldi is a compilation of South African jazz singer Dorothy Masuka’s songbook, according to the seasons of her life, and is based on Italian Baroque composer Antonio Vivaldi’s The Four Seasons violin concerti.

The songs are arranged symphonically without losing the overall quality and balance of Masuka’s work and are narrated in movements to depict the changing life seasons of Masuka. These movements pick up the historical tempos of Masuka’s life and the changing modes she went through as a person depicting the harsh, beautiful, loving and sad moments.

It will be performed with a 20-piece ensemble, comprising strings, jazz band and voices under the baton of Kutlwano Kepadisa. 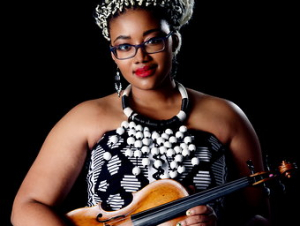 Born at the turn of the century in 2000, Neo Motsatse is a South African violinist who started playing violin at the age of six. She began her formal performance career at the age of 10 and has featured as soloist with different orchestras, touring locally and internationally.

She has participated in a number of classical music competitions in the country and, in 2015 she, together with flautist Althea Steynberg and accompanied by maestro accordionist Sergio Zampolli, was the overall winner of the National Eisteddfods Academy’s Gold Medal.

For the past eight years., Motsatse’s work has represented symphonic arrangements of classical and popular South African music, fusing the history and collaborative elements in a contemporary culture, helping to make classical music accessible to everyone.

She won Standard Bank Ovation awards in 2016 and 2018 for excellence on the Fringe. In 2018, Neo staged a compilation music production titled Letters with MaSisulu, a tribute to leading South African struggle stalwart Mama Albertina Sisulu on the centenary of her birth.  After this production, Motsatse saw an opportunity to celebrate women who have made or are making significantly positive contributions to our society, often having to make personal sacrifices. Seasons, her latest production, will be the second in what is intended to be an annual series on “Women of Influence”.

Motsatse’s Ovation Award last year offered her the opportunity to be part of this year’s Arena, the platform which acts as a bridge between the Fringe and the Main programme. She will be performing at the Victoria Theatre on 1 July at 17:30, 2 July at 19:00 and 3 July at 19:00.