What is better than a new customer? One that comes back for more – and a whopping 83% of respondents to our post-Festival survey said they would return to the annual celebration of the arts in future years.

The “How Did We Do” survey, sent out by email to subscribers to our Fest44 newsletter, aimed to assess visitors’ experiences at the 2018 National Arts Festival. A total of 382 people responded.

“Our post-Festival survey showed that the totality of the Festival experience is important to visitors, with the general vibe and the Village Green emerging strongly,” said Festival CEO Tony Lankester. “But with 90.1% of respondents citing ‘the shows’ as being a highlight of their Festival, it’s clear that appreciation of live performance is alive and well in South Africa.” 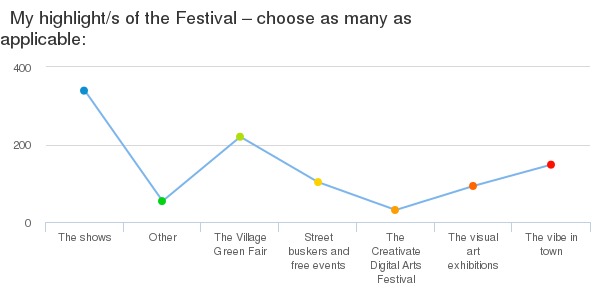 “Our audience loyalty and retention rates are extremely high, with 82.67% of respondents saying they would return in future years. We are delighted with the response we saw to our new initiatives and the work of our artists,” Lankester said.

Nearly 80% of respondents to the survey said that seeing new work and discovering new voices and talents was either important or very important to them. However, Lankester noted, “there is a gap between that response and what we’re seeing in terms of actual ticket sales, where audiences are gravitating to companies and venues that are known and familiar, with a strong track record”. Attendance was strong at discounted and free performances from lesser-known companies, indicating that they are open to new work but are perhaps reluctant to take an economic risk.

Other feedback from the survey included:

If you were a respondent, thank you. We have read each and every response – we have also taken careful note of what you’ve shared with us, including your ‘lowlights’, and will address the things we can change for next year.

Congratulations to Beaufort East resident Heleen le Roux, who won the R2 000 NAF gift voucher, which she will be able to use towards tickets at the 2019 National Arts Festival.