Each year the Festival celebrates the work of the recipients of the Standard Bank Young Artist Awards, with each artist presenting exciting new work that will premiere at the National Arts Festival. Here’s what you can look forward to in Grahamstown in 2018: Through the lens of kamishibai, an ancient Japanese storytelling medium, award winning theatre maker Jemma Kahn (The Epicene Butcher, In bocca al lupo) tells the story of Francis Bacon and Lucian Freud. These men each had a muse who helped them on their way to prodigious fame. As you might suspect, it did not end so well for the muses. THE BORROW PIT asks with harrowing humour, ‘Is art more important than people?’ Written, directed and illustrated by Kahn, she also joins a stellar cast of Tony Miyambo, Wilhelm van der Walt and David Viviers. 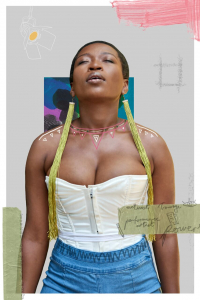 INDLULAMTHI is the isiXhosa word for a giraffe but, in direct translation, it also means ‘the ones who are taller than the trees’. Sopetela uses this image to celebrate the children who are on the pavements of Grahamstown. The piece will be performed on the streets of Grahamstown and, using video, sound and performance elements, seeks to challenge our thinking of currency; and the connection between people. “At height, INDLULAMTHI, will be almost a statue element, which will then dissolve into nothingness again”, says Sopotela. Against the many on-going incidents that draw attention to the silenced brokenness of the black male identity, UDODANA explores the black male body; its associated and constructed identity and its placement in the society (particularly in traditional African communities, households and churches). Fusing both abstract and narrative approaches, the work explores indoctrination and incubation into the systems that ignore the development of black power and unity. Incorporating aspects of scented sculpture, textiles, found objects and performance, Igshaan Adams’s WHEN DUST SETTLES installation will comprise between 15 and 20 artworks and take the form of an immersive environment in the subterranean space of the Monument in Grahamstown.

Revisiting earlier bodies of work, the presentation will draw inspiration from conceptual themes, artistic processes and materialities dating back several years to investigate the evolution of ideas within the artist’s practice. The work includes a performative element with Adams’s brother, Kashief Adams. Guy Buttery’s endless movement towards a distinct musical voice has led him to distil heritages and traditions (as well as their contradictions and tensions) with de-colonialised elements into a new and highly innovative song form that combines the artist’s adoration for both Southern African musical traditions and ambient music forms fusing cinematic soundscapes within the context of South Africa.

Buttery will collaborate with artists across a number of works to produce a sound that is expected to include Indian Classical aspects and a capella vocals alongside a variety of strings instruments including a sitar and double bass, with Buttery on an improvised soundscapes, mbira and various guitars. The combination of this varied instrumentation creates a rich tapestry pioneering new musical terrain and will surely be something National Arts Festival audiences will remember for years to come. Thandi Ntuli will feature in three performances at the Festival. The first, on Friday 29 June, will be an exploration of her music to date from her albums The Offering, and the recently released, Exiled.

On Saturday 30 June she will be in the REBIRTH OF COOL with DJKenzhero on the decks and a powerful young band to create a reinterpretation of Miles Davis’ seminal 1957 album, Birth of the Cool. This, mixed with the sounds and styles of current South Africa, results in a merging of three generations of music – 1960s jazz, 1990s hip-hop and contemporary South African jazz fusion.

Sunday 1 July sees Ntuli on the piano in WAY OF DANCING. Two of Switzerland’s most interesting young vocalists, Lisette Spinnler and Julie Fahrer, in South Africa on a ProHelvetia residency, share their music with an excellent South African rhythm section, blending the sound of jazz from two continents. Their music collectively draws attention to the modern and progressive approaches to jazz that the new generation of music makers represents, weaving a tapestry of sound ever intriguing and beautiful. They are joined by Shane Cooper (bass) and Peter Auret (drums).

“We at Standard Bank have long understood the importance of investing in youth and their careers. By enabling them to build sustainable careers, we contribute to a viable creative economy. This imperative gives the Festival a more important focus. It’s central to the work of nation building and future proofing our country through empowering our creative young people,” says Jenny Pheiffer, Head: Brand and Sponsorships: Standard Bank.