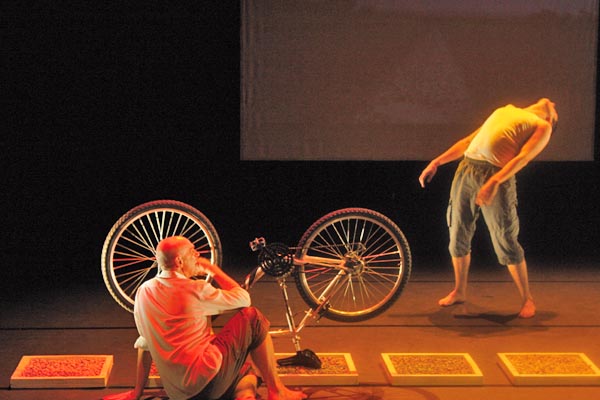 Gary Gordon, the “father of South African physical theatre”, was presented with a Standard Bank Standing Ovation Award at a reception held at the Monument in Grahamstown on Friday, in honour of his “longstanding creative energy in South Africa’s cultural life and his enormously significant contributions to the vitality of the National Arts Festival’s Main, Fringe and Arena programmes”.

The citation was presented by Artistic Director Ismail Mahomed, who also presented an award to the French Institute in South Africa in recognition of their 20 years of collaboration with the National Arts Festival.

The Standing Ovation Award has been awarded in previous years to:

Here is the full text of the Citation presented to Gary Gordon by Artistic Director Ismail Mahomed:

Gary, born in Durban, is a speech and drama honours graduate from the University of Natal, who danced with Cape Town’s Jazzart Dance Theatre, South Africa’s oldest contemporary dance company. He has subsequently worked with, or performed with, renowned choreographers in London (such as DV8 Physical Theatre founder Lloyd Newson) and in his homeland, as well as choreographing for South African directors. A significant number of South Africa’s leading actors, choreographers, dancers, artistic directors, dance academics and theatre practitioners can attest to Gary Gordon’s enormous influence on the dance and theatre sectors.

He joined the Rhodes University Drama Department and also qualified as a Cecchetti teacher. In 1987 Gary obtained a Master’s Degree in Dance Studies at London’s Laban Centre for Movement and Dance. From 1989 to 1992, after receiving the first landmark Standard Bank Young Artist Award for Contemporary Dance (1989), Gary joined the Laban faculty teaching choreography, dance history, contemporary dance technique and ballet. From 1991 to 1992, he also lectured in Voice and Movement at the Lee Strasberg Studio, in London.

On his return to South Africa, in 1992, he took up tenure at Rhodes University initially as Senior Lecturer in the drama department and moved up, in 2014, as Professor and Head of Department specialising in, and teaching choreography, somatics, practice research, dance performance and training , and a new core course:  TheatreLAB – integrating conceptual, performative and creative research in theatre-making.

In 1993, at Rhodes, he was founding Artistic Director of the ground-breaking First Physical Theatre Company also participating as a performer and choreographer. First Physical ‘s trailblazing work has included collaborations with playwrights, actors, designers and composers culminating in the award-winning dance-plays: The Unspeakable Story (1995), Bessie’s Head (2000) and Ozymandias (2008), which was a collaborative partnership with artists from Tulane University in New Orleans.

In the Spring Term of 2009, Gary was the Guest Artist in Residence at the Department of Theatre and Dance, Tulane University, New Orleans. From 2010-2014 he took a break from South Africa to take up the position of Head of Academic Studies at the Hong Kong Academy for Performing Arts. He was also MFA Coordinator working with students from Hong Kong, Mainland China, Singapore, the Philippines, Taiwan, and Korea. He also served on the selection panel for the Hong Kong Dance Awards.

As a highly respected academic, Gary Gordon is also a recipient of many awards. He was presented with the Rhodes University Vice Chancellor’s Award for Distinguished teaching in 2000. In the same year, he was also awarded the Eastern Cape Premier’s Award for Choreographic excellence and the FNB Vita Special Award for Choreography in his production, Bessie’s Head. Previously, in 1994, he was named FNB Vita Choreographer of the Year for his production of First Physical Theatre Company’s Shattered Windows and in 1996 he received the Vita award for Most Outstanding Presentation of an Original Contemporary Dance Work for First Physical’s The Unspeakable Story.

Through a combination of creative energy and intellectual stamina Gary Gordon has contributed an immense vision for the development, growth and promotion of contemporary dance both in South Africa and internationally

The success of many South African performers, dance makers and theatre makers who have been taught by him are a testament to the impact of his ongoing contribution and enduring legacy.